A new genre of fiction.

Want to read something new and exciting?

Believe me, urban thriller is a genre of fiction that is about to get popular.

Do you remember S.E.Hinton's Outsiders?
That book/film was in the late 70's. You will be hard pressed to find a book similar to Outsiders.

Later on this year, Mel Gibson will be staring in Under and Alone, the true story of a A.T.F infiltration of the Mongrels, a American outlaw biker's gang. This film is bound to get the public's interested in bad-boy bikers.

In Times of Violence is an urban thriller, about a biker's gang in London. The lifestyle, the violence they partake in, and the brother hood of the gang, makes this novel and engaging, exiting read.

Lawless Justice, another urban thriller, is currently in the hands of UK literary agents.

Huntress, is due for release in summer 08.


I have a lot of passion for this genre of book, even though I'm a versatile writer and have been published in all genres.

I hope you'll take a look at In Times of Violence. It will not disappoint!


Reviews, excerpts and links to published work
Buy In Times of Violence in printed or E-book format 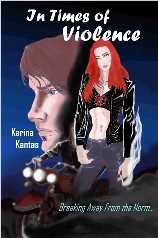