Jeffrey H. Konis Explores the Life of His Grandmother, a Holocaust Survivor, and Highlights the Importance of Family History in New Novel 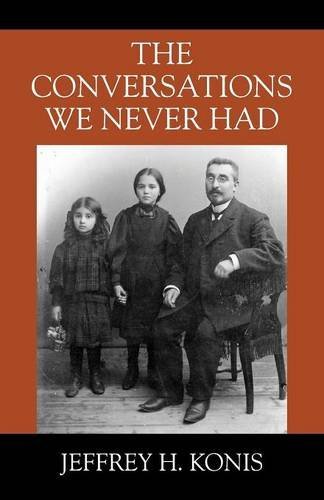 August 1, 2016 (Goshen, NY) – Author Jeffrey H. Konis announced today that his latest work, The Conversations We Never Had, is now available for sale on Kindle.

The Conversations We Never Had tells the tale of a grandson who had taken his grandmother for granted, but didn’t realize it until it was too late. It is a memoir / historical fiction novel that is based on Konis’ relationship with his grandmother.

“My father remembers nothing about his real parents. They were dead by the time he was nine. Olga, his mother's younger sister, not only survived the Holocaust, but was able to find my father at his hiding place – a farm in Poland – and later brought him to America to raise as her own. In all that time, he never asked her any questions about his parents,” says Jeffrey. “Years later, I moved in with Olga for a period of time, but I allowed history to repeat itself – a classic mistake – and failed to ask her the same questions my father avoided. Olga has been gone for more than twenty years, along with everything she could have told me. I am left with a sense of guilt and profound regret, wishing so badly that I could go back and have a second chance to get to know her better and learn more about my family from the only person in the world who knew them and remembered them.”

The Conversations We Never Had is a chronicle of Jeffrey's time spent with his Grandma "Ola" and an imagining of the stories she might have shared had he only took the time to ask the questions. It is a heartwarming story that will leave you eager to spend time with your family and learn more about them before it’s too late.

To learn more or to read an excerpt from the book, go to http://bookpublicityservices.com/conversations-never-had-jeffrey-ko...

Konis currently resides in Goshen, New York with his wife, Pamela, and sons, Alexander and Marc. He loves reading, collecting fine art photography, soccer – especially Liverpool F.C. – travel, and his family most of all.

For further information, to request a review copy, or to set up an interview or appearance by Jeffrey H. Konis, please contact Kelsey McBride at Book Publicity Services at Kelsey@BookPublicityServices.com or 805.807.9027.