Stealing from a warlord and giving him the one finger salute as I made my getaway was not the brightest thing I’d ever done. Okay, it was an incredibly stupid stunt.

Did I mention that this particular Coletti warlord is the most feared in the entire galaxy? That Zarek’s the ultimate predator and even the other warlords are scared spitless of him? That he never ever stops until he either captures or kills his prey? Yeah, I have the big, bad after me and all because of one little finger. Okay and a Ditrim crystal the size of my fist. Am I worried? Of course, only an idiot doesn’t fear a very angry Coletti warlord. But, I am very good at what I do. Bad news is, so is Zarek.

My psychic senses went into alert mode. Someone very powerful had just teleported in. My heart stuttered in shock as Zarek’s predatory gaze locked on me. Balock’s balls! Of all the pleasure palaces in the galaxy, he just had to walk into this one?

Something hot and primal moved in Zarek’s amber eyes and I gulped in horror. Hells bells! He wanted me. Not in the torture and kill kinda way, but in the lick every inch of me kinda way. Maybe I had used a little too much sexual juice.

Okay, way too much, because I suddenly craved his touch. This was bad on so many levels but how could any female not want to touch every delicious inch of him?

Zarek practically oozed sex appeal and he had the hard, muscular body and chiseled features of a vid star. His long ebony hair was done up in those sexy warrior’s braids. Yummy!

Doing it with him would be mind-blowing and probably fatal. It wouldn’t take him long to figure out that I was one who took the Ditrim crystal. But, Goddess, he was one magnificent male specimen. 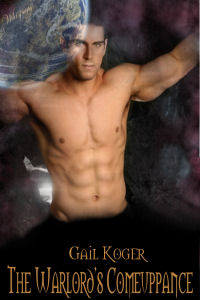 Cold fear skittered down my spine. What was wrong with me? There was no way he could have marked me, was there? I eyed the tailored black uniform that emphasized his massive frame and literally burned with the need to touch all those luscious muscles. Oh, Goddess. I sucked in a panicked breath. I had to stop this. Big, bad. Big, bad. Big, bad, scary Warlord who wants me dead, dead, dead. And don’t forget the rumors about the whole swapping out your DNA thing. A smart thief doesn’t let her hormones control her. A smart thief cuts her losses and runs.