~ “My Name is Caesar Borgia Not Jesus of Nazareth” ~

~ “My Name is Caesar Borgia Not Jesus of Nazareth” ~

I am Not Jesus I am Caesar Borgia…

Caesar Borgia, Duke of Valentinois, was an Italian condottiero, nobleman, politician, and cardinal, whose fight for power was a major inspiration for The Prince by Machiavelli. He was the illegitimate son of Pope Alexander VI and his long-term mistress Vannozza dei Cattanei. He was the brother of Lucrezia Borgia; Giovanni Borgia, Duke of Gandia; and Gioffre.

Is This Image Above Really The Image Jesus?
Michelangelo Fraudulently painted Caesar Borgia As Jesus Christ to deceive the world!
http://www.israelite.net/image.htm

The images and idols displayed in the churches are not of Christ. Michelangelo first painted the most common religious image used in deceiving the world today. It is a picture of a blue-eyes European with blond hair, who they maliciously claim to be Jesus Christ. This false image was modeled after Cesare Borgia, who was the second son of so-called Pope Alexander VI, of Rome. The real Jesus, according to all scientific and historical facts, is an Afro-Asiatic man.

<4> Thou shalt not make unto thee any graven image, or any likeness of anything that is in heaven above, or that is in the earth beneath, or that is in the water under the earth: <5> thou shalt not bow down thyself to them, nor serve them: for I the Lord thy God am a jealous God, visiting the iniquity of the father upon the children unto the third and fourth generation of them that hate me; <6> and showing mercy unto thousands of them that love me, and keep my commandments.

Herodotus, an ancient historian, described exactly what the ancient Egyptians and Hebrews looked like, which he witnessed with his own eyes. Herodotus, who visited Egypt about 457 BC, says in Book II:

[The Nubians, the Egyptians, and the Ethiopians have broad noses, thick lips, woolly hair, and they are burnt of skin.]

Let’s examine some principle verses in the 1611 translation of the original Bible which confirm the fact that the Israelites were a non-Caucasian people of Asiatic descent. Please be aware that many of the new versions and translations of the Bible have maliciously mistranslated the verses where the prophets are describing the complexion of the Israelites!

If the Bible you’re using translates the following verses differently, that translation is false. Of all the English translations, the King James 1611 translation is so far the most accurate I’ve seen.

Lamentations 4:8 >> [Their visage is blacker than a coal.]

Jeremiah 14:2 >> [Judah mourneth, and the gates thereof languish, they are black unto the ground.]

Song of Solomon 1:5, 6 >> [I am black, but comely, O ye daughters of Jerusalem, as the tents of Kedar, as the curtains of Solomon. Look not upon me because I am black.]

Acts 13:1 >> [Now there were in the church that was at Antioch certain prophets and teachers; as Barnabas and Simeon that was called Niger…]

The disciples were being called “Niger”, a word that means Black. There was an event in the Bible where a Roman policeman called Paul an Egyptian, because Paul resembled the Africans:

Acts 21:38, 39 >> [And as Paul was to be led into the castle, he said unto the chief captain, May I speak unto thee? Who said, canst thou speak Greek? (Paul did not look European: Paul was of a dark complexion) …Art not thou that Egyptian (African), which before these days madest an uproar, and leddest out into the wilderness four thousand men that were murderers? But Paul said, I am a man which am a Jew.]

Amos 9:7 >> [Are ye not as the children of the Ethiopians unto me, Oh house of Israel.] 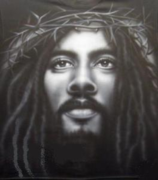 Paul and all of the disciples were Asiatic in appearance, as were the original Egyptians and Ethiopians. They did not look like Greeks, Romans, and Germans. That is why the centurion captain asked Paul if he was an Egyptian.

All of the nations descended from Noah. According to the tenth chapter of Genesis, Noah had three sons: Shem, Ham, and Japheth. Ham is the father of the Africans. Therefore, Ham could not have been a Caucasian man. Japheth was the father of the Asian. Therefore, Japheth had to be an Asiatic man, like his brother Ham. Shem was the father of the Middle Easterners, the Indians of India. In reality we are all one family upon the earth, with common ancestors! The nations of antiquity were all of the Asiatic type. If all three of Noah’s sons gave birth to people of color, Noah himself must have been of the Asiatic type also, and going all the way back to Adam.

The skin color of Christ is described as being dark: as if it was burned in a furnace.

Revelation 1:14,15 >> [His head and his hairs were white like wool, white as snow (Christ suffered a lot, and went gray early in life), and his eyes were as a flame of fire (reddish), and his feet like unto fine brass as if they burned in a furnace!]

Brass is already brown, like a doorknob; anything burned has to get very dark from oxidation. And Christ’s feet were the same color as the rest of his body: dark brass!

“They continue to portray ‘Him’ as white in a white ruled world by displaying paintings and new statue dedications. It is a lie! For “I am that I am; I am what I am!””

“Saying that I am Alpha and Omega the first and the last: and, what thou seest, write in a book, and send it unto the seven churches which are in Asia; unto Ephesus, and unto Smyrna, and unto Pergamos, and unto Thyatira, and unto Sardis, and unto Philadelphia, and unto Laodicea.”