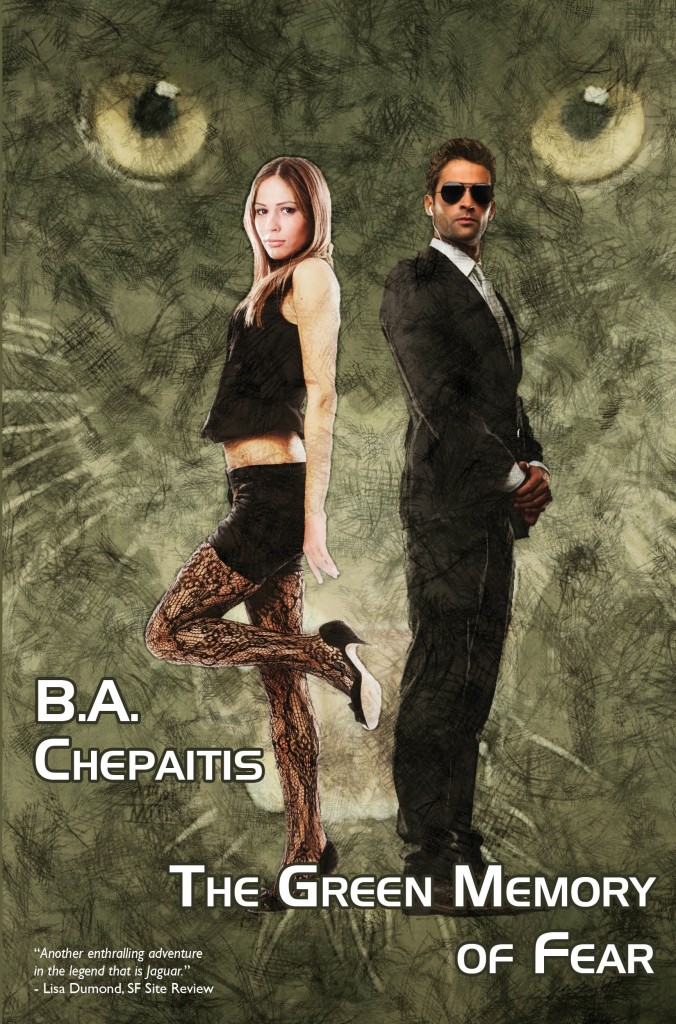 B.A. Chepaitis will be touring in March and April with her sci-fi paranormal novel The Green Memory of Fear.

On Prison Planetoid Three, Jaguar Addams uses her empathic gifts to make criminals face the fears that drive their heinous acts. Very few escape the telepathic web she weaves around them. . . . until now.

When Jaguar takes on an assignment investigating a psychiatrist on trial for abuse of a little boy, she finds a killer unlike any she’s faced before. Dr. Senci’s psi skills are a match for her own, and unless she consents to do as he wants, he’ll use them to kill everyone she loves. Once she realizes who and what he really is, she leaves the Planetoid to go after him. But Supervisor Alex Dzarny isn’t about to let her go it alone, even if it means losing his own life to save hers.

When Jaguar made her way across the restaurant to where Alex sat, he almost forgot to breathe. She wore her gold silk pantsuit the way some women wear skin, and the color deepened the green of her eyes, caught at the gold in her hair, which caught at the air in his throat. He rose from his chair and gave her the bow she deserved.

She lifted her gaze and he felt the brush of her thoughts against his. Just fishing. Just seeing what was hanging around. Her mouth twitched into a smile.

He walked over to pull her chair out for her, letting his hand rest briefly on her shoulder after she was seated. She didn’t shove him away, so he advanced to a caress.

She opened her menu and said, without raising her head, “If you air kiss me, I’ll kill you.”

“When I kiss you there won’t be any air involved,” he replied as he returned to his chair.

So far, he thought, so good. She would keep it light. Stick to the surface like an Olympic skater. Probably he’d enjoy it immensely. By the time the waiter came by and took their orders for tequila and dinner, he knew he was right. She got the lobster. He’d seen her eat lobster before. Predation and sensuality, both at their best.

“So what do we talk about?” she asked after the first shot of tequila was down, “First date, right? Politics are a no-no. Religion’s touchy.”

“No good. You’re a Packer Backer. I favor the Jaguars. You’ll just get pissed off when I talk about winning.”

“Packers have more experience. More staying power. You know that.”

“And once Jaguar’s latch on, they don’t let go. Not until they’re dead.”

“I’m not especially worried about that,” he said.

Arrival of their dinners interrupted further debate and, eschewing the bib, she cracked a claw and pulled white meat from the shards with her fingers. She dipped it in butter and licked the meat, the ends of her fingers, her own lips. Alex felt deep contentment.

“If sports are out, then what do you suggest?” she asked.

“We can start with the courtesies. That outfit looks lovely on you.”

“Thank you,” she said, and ripped a leg off the lobster, sucked meat from the end of it.

He leaned an elbow on the table and rested his chin on his hand. “You like lobster, don’t you?”

She cracked the tail and used her fingers to pull out thick pieces of sweet flesh. “One man said it made him sick to his stomach to watch me eat it.”

“Some men,” Alex suggested, “have weak stomachs. Me – I’m just enjoying the show.”

She continued to pursue her pleasure. Talk turned to food and its preparation, meandered from there to good wine, strolled toward music and always stayed on the safest grounds. Alex didn’t mind, as long as the lobster held out. When it was gone, he sighed, but regained his interest when the waiter brought chocolate mousse, which she savored in small lipfuls sucked from the end of her finger.

“Very,” she replied. “But you haven’t eaten much. Not to your liking?”

He shook his head. “I’m distracted.”

He gestured toward the mousse. “The show,” he said. Then, to his own dismay, he kept talking. “That, and something at work.”

Jaguar’s finger paused in its journey toward her mouth. “Oh?” she asked.

He knew what he was about to say, knew he shouldn’t say it, and said it anyway. “One of my Teacher’s done something out of character,” he said. “Way out. I want to know why.”

He listened to himself talk with some amazement. He’d made up his mind not to bring up Dr. Senci. Apparently some part of him had vetoed his mind. He sincerely hoped it wasn’t the Adept part. That wouldn’t bode well.

“My best Teacher. She stays in the field. Never does research.”

“I thought you might. But she requested a research assignment today, gathering preliminary data on an accused pedophile. A Dr. Thomas Senci.”

She finished licking her finger and stared at him. He didn’t blame her. If he had a mirror, he’d stare at himself.

“News,” she said, “travels too damn fast. I just punched it in this morning.”

“Jaguar, I’m your supervisor. The request came to my office.”

She smoothed her hair back from her face and looked at him, then past him. They were co-workers again, suddenly and without much elbow-room.

“It’s about a four week gig, Alex. I thought the change would be good for me. Keep me from going stale.”

He tapped a finger against the table. “And what if I say no?”

She gazed down at his hand, pressed hers against it. “Will you?” she asked.

He laid his hand, tense and flat, against the wood of the table. She continued to press down on it. She was so much better at putting up ‘No Trespassing’ signs than she was at reading them.

“I need to know why you want it before I decide,” he said. “And you don’t take research for fun, Jaguar, so try something else.”

“You seem to know a lot about me, for a first date.”

“I’ve had a few years of my own preliminary research. Look, if you want, we can talk about it tomorrow, in my office.”

She sighed and stood up. “Get the bill, and meet me back at my place. I’ll show you.”

Find out more about this book and BA Chepaitis at her blog: A Literary Lunch

**This book is part of a series. If you have not read the previous books, they will be provided. Please make sure you have enough available dates and the time to review more than one book.**

If you would like to review The Green Memory of Fear, please email Jaime McDougall at jmfictionscribe@yahoo.com.au.