Night of the Beast: A True Paranormal Investigation. Chapter One ... just a little taste (of blood) 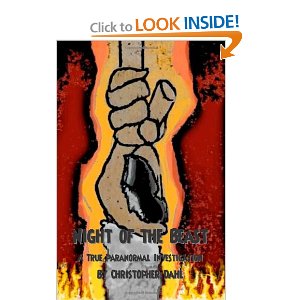 The Night of the Beast

Timing was crucial. It was the third full moon of the new year,a time to gain power for initiates, a time to replenish powers for the acolytes and the Overlord who presided over the ceremony called the Night of the Beast, a ceremony lasting three weeks. All clad in

black robes, thirteen priests gathered in a grotto within miles of Robert Dirscherl‘s home. The Overlord held a branch in his hand and drew a large, inverted pentagram in the dusty, Florida earth. At the eastern point, facing west, was a makeshift altar fashioned from

weathered wood. Hanging from the altar were shackles and chains. Police had found such ceremonial spots in Pasco County just north of Dirscherl‘s home in Dunedin, Florida and were baffled. Behind the altar was an inverted Cross. Two priests, their hands still bathed

in the blood of the slaughtered beast that symbolized Satan, hung

the animal by its cloven feet, upside down.

The ceremony was called to order. The thirteen-priest coven

began walking counterclockwise around the inverted symbol at

their feet, slowly, chanting in the parlance of Satan himself. As

each of them neared the hanging goat and dripping blood, each

hoped a drop would fall on him. That would be powerful magic;

one chosen by the dark ruler himself.

One was chosen by a bit of blood falling on his forehead. The

Chosen One was taken to the altar and shackled. With a ceremonial

dagger, the priest cut the Chosen One from the throat to the pelvic

bone, much like an autopsy. The heart, symbolically holding the

life-source, was cut out and placed in a cauldron. The eyes were

removed to enable the remaining priests to see the future. Blood is

drained. All of this was added to the cauldron, along with urine

from the remaining twelve, and a blasphemous wine, the blood of

His blood, is created. Then, the participants drank it, imbibing the

power of life, the strength of future visions, and the vitality of

Thus, under the third full moon of 1977, beginning at midnight

of March the 6. Thus began the Night of the Beast ceremony that would