In just a few short moments her lover would return to her. It would be a bittersweet reunion, however, for they could only be together one hour.

Lightning lit up the long windows in the study of the grand old mansion she had called home for the past two hundred years. Soon the room would be filled with joy and passion instead of silence and desolation. And loneliness.

The waiting was torture for her and for Tristan. But they would not spend their precious minutes together in bitterness and thoughts of revenge. They were past that point by now. The spell could not be broken.

At last! At long last, as thunder cracked and the fire grew higher and brighter in the hearth…through a swirling mist before her, he appeared.

“Tristan!” she said, the sound of her voice revealing her depth of relief.

As the mist quickly cleared, Tristan stepped forth, tall and broad, his long cape swirling around his feet. His blond hair appeared windblown as it cascaded back from his handsome face and brushed upon his shoulders.

“Dear heart!” He wasted no time in taking her into his strong arms, tilting her back and ravishing her lips with a kiss. 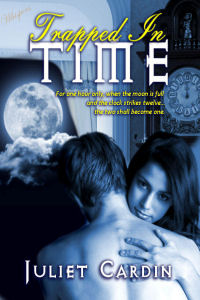