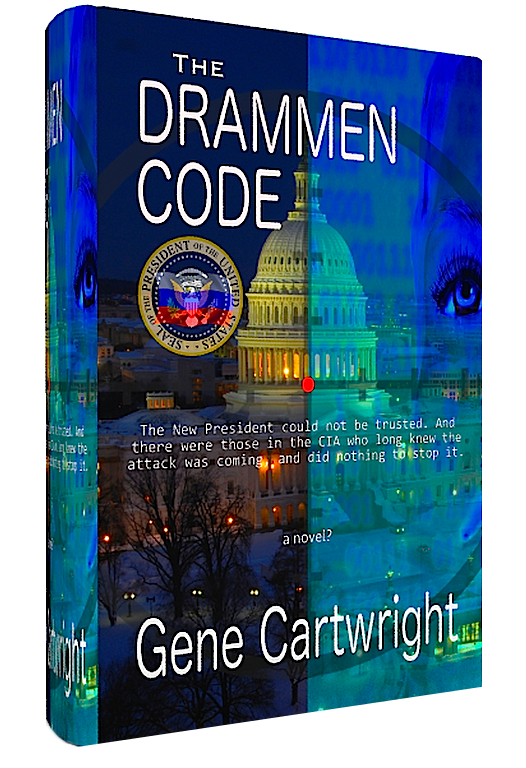 President David Brandon could still not be trusted.

Shortly after his election, key American allies erected firewalls to guard sensitive intel. In fact, there were those in the leadership of CIA who, for more than twenty-five years, knew an unprecedented attack on the U.S. was coming, turned a blind eye, and did nothing to stop it.

Where did it begin?

It began in 1991. Young CIA officer Sean Ryan is scapegoated and targeted for “retirement” inside the U.S. by the CIA itself. It follows a massive intelligence failure in Oslo, Norway involving an insidious Russian plan to make good the late Soviet leader Nikita S. Khrushchev’s 1956 warning: “We will bury you.”

WARNING:
By the time you read The Drammen Code it may already be too late.

Nearly a full year into the administration of controversial President David Brandon, there are those within the hierarchy of our security agencies who yet conceal vital details from the world’s most powerful man: President of The United States, Brandon’s past comments and actions in praise of, and welcomed by, the current Russian leader, have not set well within the intelligence community or among traditional U.S. allies.

Intelligence agencies such as MI6, Mossad, BND, DGSE, and even ISI were forced to rethink established data-sharing protocols regarding the U.S. government. In an unprecedented action, these agencies have erected a firewall designed to protect against a suspect world leader and critical elements of Brandon’s administration.

However,  the CIA’s filtering of intelligence provided POTUS is not new; this unspoken exercise of prerogative has persisted for decades. However, over the past thirty years the practice has become particularly insidious; now it is essential.

For nearly twenty-six years some in the U.S. government, with questionable loyalties, have kept a deadly secret. As a result, we have not focused on the real enemy; we have squandered vital strategic resources and may have sealed our fate as a nation. That fact has been made frighteningly real by the election of President David Brandon.

What follows is a warning. If we are lucky and heed the signs, there may be one final chance to ensure the long-term existence of the United States of America as we know it.

One man, fugitive CIA agent Sean Ryan, must decide whether to come in from the cold, reveal a deadly secret and sacrifice himself, or witness America’s demise.

In the words of late author, James Baldwin, from his bestselling book, The Fire Next Time, a prophecy recreated from the Bible in a song of a slave:

"God gave Noah the rainbow sign; no more water, the fire next time.

The eBook will be released on Inaugural Day.

The hardcover will be released March, 2017.