What's So Significant About The 2012 Solar Eclipse?

There it is – that tell-tale dark orb slipping across the bright sun-disk in the sky.  It reaches, stretches, smothers the sun until only the outer ring of fire can be seen – but not without eye protection of course.  90% of the sun hides behind the moon’s shadow, and yet it’s powerful brightness will not be outdone.  We just witnessed an eclipse.

It isn’t every day we get to witness the astronomical alignments that create eclipses.  They are sure to attract attention when they do occur.  But this year’s particular eclipse had been special, something ancient Mesoamerican cultures had been looking forward to for a thousand years.  But why?

A look at Toltec cosmology can answer that.

Keep in mind, the Toltec center of creation was the zenith – that portion of the sky directly above.  Any heavenly bodies that crossed the zenith were of particular interest, specifically, the star cluster, Pleiades.  In Toltec mythology, the Pleiades symbolized Quetzalcoatl, the infamous Feathered Serpent deity.  Their New Fire Ceremony that was held at the end of their 52 year Calendar Round cycles were actually markers intended to keep track of the Pleiades crossing the zenith at midnight.  This ritual tracking was necessary to stay on track with precession, which shifts the position of the stars (including the Pleiades) over time.

The fabled return of Quetzalcoatl.

In Chichen Itza, the Toltec and Mayan cosmologies came together and according to mythology, there are 5 world ages, each age contested over by Quetzalcoatl and his twin, Tezcatlipoca.  The world age before the 2012 eclipse was the 5th world age which has been ruled by Tezcatlipoca  for over 5,125 years .  (That’s the world age duration calculated by one cycle of the Mayan Long Count Calendar)  However, when the Pleiades meets the sun at the zenith, that alignment heralds Quetzalcoatl’s return to the world age throne, bringing a renewal of the new age cycles.

Now, anyone who’s familiar with precession will tell you that the sun-Pleiades-zenith conjunction over Chichen Itza will occur for approximately 200 years, starting right around the turn of the century.  The slow process of Precession didn’t bring them into alignment over night, so they won’t fall out of alignment over night either.   So why was 2012 the year designated as the launch of Quetzalcoatl’s new age?

Well, remember yesterday’s eclipse?  Not only did the sun and the Pleiades meet in the zenith directly above the Pyramid of Kukulkan in Chichen Itza, the moon was there too!  Perhaps the rarest of all astronomical alignments!

And that is why the 2012 solar eclipse was so important to the Toltecs one thousand years ago.  Welcome to the New Age of Quetzalcoatl! 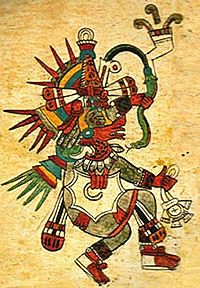