Dee Owen has not received any gifts yet

Something About Me and My Book:
Marjorie Grace Patricia Bridget Owen.

Was born on September 11th 1911 in England and endured the bombardment of World War II. As far as we know, she was born out-of-wedlock with an Irish Lord for a father and a Russian princess as her mother. Although her life before working is somewhat sketchy, her career, as a major London department store clothing buyer, was long and interesting. Members of the Royal family were amongst some of her more famous clients. Marjorie found time to write many short stories and four novels ranging from romance to mystery. She did not attempt to publish any of her writings. We can only surmise that she wrote for the joy and did not wish to seek any recognition or fame.
Marjorie passed away on March 28th 2004, after a very full life, at the age of ninety-three.

Mum had told Mike that she had written a couple of stories and let him read them some years ago. She expressed no interest in having them published at that time. He was never aware of the amount that she had written until she passed away. Mike, being an only child and having no Aunts or Uncles, is the sole heir to Marjorie’s estate. He discovered the box full of Mum’s writings on clearing her flat in England and took them back to the USA. As an avid reader Dee (daughter-in-law) became fascinated with Mum’s stories and books. All her writings were hand written on legal size paper or note books and on both sides of the paper. Dee began reading some of the short stories (there are fifty plus). After reading a few, she was hooked and decided to attempt, the monumental task of transcribing them to computer. Mum’s writing was not the easiest to read, however, Dee had set herself the challenge and was going to follow through. At first, her husband, Mike assisted her with the ‘translation’ of Mum’s hand writing. At times they became frustrated with each other and Mum. After a couple of stories, Dee became an expert, reading Mum’s writing and even improving her own typing skills and speed. As yet, Dee has not completed the task, with a few more stories to go and two novels, after three years of work. Dee decided to see if her opinion about Mum’s writing skills were correct and began submitting several of the short stories for publishing. Several of Mum’s stories were accepted for publishing by online magazines and were published without pay. But exposure is important. A small success spurred Dee to try for bigger things. The first book of Mum’s is to be published in March 2008. “Ladies of Class” by Vintage Romance Publishing. Both Dee and Mike are really happy and hope that the book will be a success and lead to further books and stories being published. Their blog for Mum’s writings is http://marjo-mumswriting.blogspot.com and website is http://pangirl.tripod.com 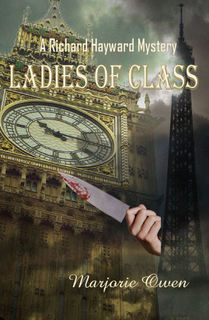 In the book Ladies of Class, Richard Hayward’s promotion and move from the big city life to the sleepy town of Burshill, England, has been shattered. Sir John Bury needs a murder solved. Clues take him from Burshill to California, Paris and London and back in time. As the story progresses the plot thickens. Richard Hayward's reputation as the youngest officer to be promoted to Detective Chief Inspector precedes him. Richard hoped his recent transfer and move to Burshill would allow him a quiet convalescence from a broken leg. But his peace was soon to be shattered by a phone call from Sir John Bury, the Chief Constable.

A murder had been committed that night and Richard's ability to solve crimes, in spite of his unconventional methods, were needed before his duties officially began.
The results of his investigations and travels, in search of clues and answers to the apparently senseless murders are surprising. Several ladies of a particular ‘class’ become part of the inquiry. As the facts begin to unfold, they not only amaze Richard, himself and the community of Burshill, but extends all the way to the top brass of Scotland Yard. In the face of adversity, Richard manages to outwit the criminal and emerges triumphant.

Glad you could join me here. Hope yo uenjoy it. Yes, there are some familiar faces aren't there?

Dee Owen said…
I am new to this group, but I see some familiar faces from other groups. Look forward to be a part of this community also! Dee