Learn how to use your intuitive & psychic abilities

Developing Your Intuitive and Psychic Abilities 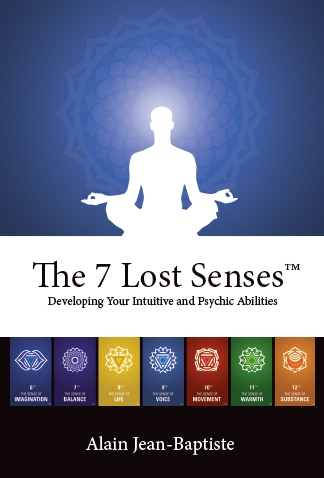 The 7 Lost Senses – Developing Your Intuitive and Psychic Abilities is a fascinating book that teaches through examples, lessons and practical applications how to tap into abilities that many of us never use and if we do, we often do not realize that we are actually doing it.

“These seven lost senses will enable you to develop new skills and abilities at reading others and predicting future events, gain access to information beyond space and time, and help gain greater understanding about yourself and others,” the author, who is an Ottawa, Ontario psychic explains. “They are the key to perceiving a new world that is already there, just waiting to be seen and experienced.”

The author notes that most people have “intuitive flashes about a person or situation” either positive or negative. However, because we don’t realize we are able to tap into this information, we fail to act on it. The five senses we all use include sight, smell, hearing, touch and taste.

The author states that the typical human being has 12 senses, or instruments. Beyond the five we know we use, this book reveals the senses of imagination, balance, life, voice, movement, warmth and substance. The sense of imagination, often called the sixth sense, he says, allows us to access to both the physical and non-physical worlds. The sense of balance allows us to distinguish between the two.

The sense of life, which he calls the “sense of light and darkness,” and “calibrates and observes the life force.” The author notes that this sense is “not limited by space or time and works hand-in-hand with the sense of imagination.” This sense, he says, “enables us to work toward self-realization by providing clear pointers toward paths and people that strengthen our light.”

The sense of voice or “voice of the soul” involves “understanding one’s true path in life as well as those of others.” This ‘voice’ can be used in life for either positive or negative purposes. As an example, the author cites Nelson Mandela, who used his voice to inspire a generation to work toward equality and peace. Hitler would be an example of the opposite.

The sense of movement, which he notes is “linked to smell,” allows us to “perceive beyond the physical world, beyond this world, when you calibrate it through the sense of imagination.” The author added, “People with those special abilities can sense the movement of subtle energies, the variation of frequencies, which are beyond the human range of perceptible frequencies. They are able to use and fine-tune their sense of movement, which can also be used in such areas as health, finance, business, education, psychology and more.” The sense of movement, the author notes, also allows us to “sense the presence of your higher self (the being that is intermediary between you and God/Goddess/All That Is), which is why it is used by some to sense the movement of entities and passed loved ones.”

The sense of warmth, which is “linked to touch, “ allows us to determine the value of “human interaction because it calibrates to frequencies that we experience as a mental sense of warmth and cold. Most typically, you use this sense to measure your interactions with other human beings.”

The author calls the sense of substance “the sense of soul because it is “most often used to discover and reconnect to one’s essence. Essence is the core of who you are; it is beyond the physical—it is the matter, the substance from which you are made.”

While some of this material might be difficult to understand at first, the author states that none of it is “magic, any more than electricity is magic” (which we also cannot physically see.) “Psychics and mediums are simply people who have learned how to use these senses in a more conscious manner.” The author adds, “With practice and time, you can acquire the skills that will allow you to see the future, know whether or not people are trustworthy and suggest actions that will bring about the greatest good.”

“By becoming aware of developing these lost senses, you will be able to perceive a whole new reality and take it to the next level: that of consciously creating your own reality, the one that currently seems like an unattainable dream.”

This book is suitable for a variety of people from those who simply wish to access the seven lost senses to open the door to the paranormal world, to those who wish to apply them to everyday life, personal and/or business relationships, helping others and more. It is a book that should be read and re-read until a complete understanding of its concepts is achieved.

To obtain a copy of The Seven Lost Senses - Developing Your Intuitive and Psychic Abilities, go to Amazon.com (http://www.amazon.com/The-Lost-Senses-Developing-Intuitive/dp/14759...) or other on-line bookstores.

For more book reviews, go to: