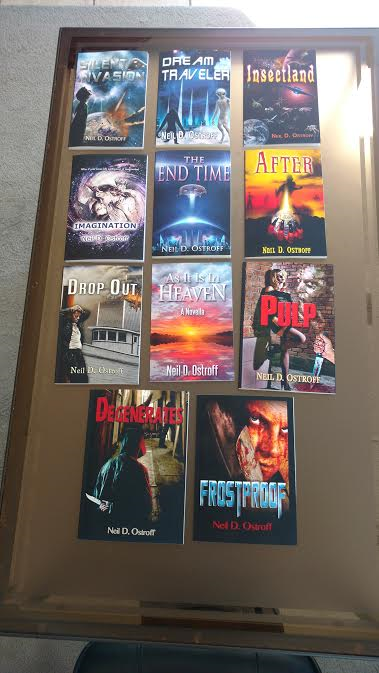 It’s been six years since I published my first ebook and a lot has happened since. I wrote and edited feverishly, publishing another ten ebooks with four hitting the #1 status on Amazon in multiple genres. To achieve this took nearly all of my time and energy, and after completing my last ebook, AS IT IS IN HEAVEN, I decided to take a break.

For nearly a year, I’ve devoted myself to myself and my interest and hobbies, spending little time writing new material and even less marketing…
Continue

After approximately twenty hours work formatting, inputting keywords, checking typo and graphics, and verifying material, my proofs are finally on their way. I can't wait to see all eleven of my books in print form. There is one tiny inconvenience, however...

Many years ago, I did publish three of my books, DEGENERATES, FROSTPROOF, and PULP in print form through iUniverse. What a huge mistake that has turned out to be. Not only was the experience a total waste of money (only about…

We should all be very worried!

A recent event in the music business caused me to take brief pause in my writing. Singer/songwriter Paul Simon is quitting the business. Now, I’m not the hugest of Paul Simon fans. I do like his music, and his impact on folk rock history is solidified. It’s the reason why he’s quitting that has me, as an artist, very worried.

How to go viral?

The title of this post may be a bit misleading. It is not a lesson on winning the viral lottery. This is a curious plea for answers. I was surfing Facebook this morning and I came upon several videos that caught my attention causing me to pause and click. Two were funny animal posts (which I love), two were posts of people doing dumb things, and one was of a car accident (morbid sense of curiosity).…

There have been a lot of changes to Amazon and how it sells books since I broke from my agent and started on this solo indie adventure.  A few years ago, the process of self-publishing an ebook was much simpler. You wrote a manuscript, edited, formatted, designed a cover, uploaded the file, and poof… it was available for sale all over the world. If the story you wrote was any good you just might have sold a bunch of copies. If you were hard-working and totally…

Wow… it’s been a while since I checked the visitor stats on my blog and I must say I am impressed at the amount of hits I have been receiving. Last month, my blog received more than 25,000 hits. That’s more than some book sites that sell advertising. Yesterday alone 1,350 people clicked on and checked it out. I sincerely appreciate the interest.…

Got a couple of nice new reviews for DROP OUT and IMAGINATION from some awesome readers! Thanks for taking both books to the #1 bestseller spot on Amazon!

Neglecting to market my books and myself has always been my weakness. While I love the process of writing (creating new characters, worlds, and plots) the arduous task of promoting my work can seem dauntless at times. After writing consistently for 25+ years, I recently made the conscious, and I must say extremely difficult decision, to take a break from it all. I have gone thirteen months without publishing an original book and as of right now, two months have passed without me writing an…

When I first began writing IMAGINATION, I envisioned a book which would propel readers beyond the norm and into realms where the utterly unbelievable was possible. I wanted to blow their minds! Fascinated by the physical and psychological endurance experienced by POW’s during times of war, I knew prolonged periods of isolation and injury invoked defense mechanisms of the mind. Part of this defense is to escape inside one’s own thoughts and memories. Tiniest details of imaginary worlds become…