Memories From the Daughter of a Vietnam War Veteran 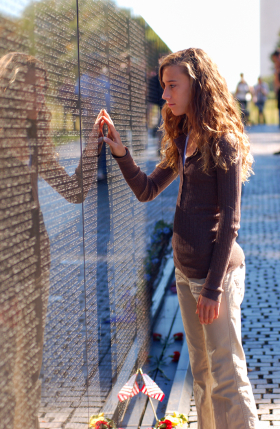 I asked Anna Horner, who blogs at www.diaryofaneccentric.blogspot.com, to write a guest post after she talked about her father in the review she did of MRS. LIEUTENANT: A SHARON GOLD NOVEL on her blog (http://tinyurl.com/6z9cn6). I particularly appreciated her description of visiting the Vietnam Veterans Memorial because Sharon Gold visits this memorial in the epilogue of MRS. LIEUTENANT.

I was seven months pregnant, with swollen ankles, sore feet, and an aching back. I hobbled a mile or so around the city, my soon-to-be husband scolding me for not sitting down to rest. But I was on a mission.

Thousands of names stretched out before me, etched into the smooth, black wall. They were warm under my fingers, brought to life by the flowers, pictures, notes, and other mementos from the ones who will never forget, who wear the memories heavy around their necks. Come hell or high water, I said, I’m doing this for my father.

It was late spring 2000. My father, who was an MP in the Air Force during Vietnam, passed away unexpectedly a few months before without fulfilling his dream of visiting the Vietnam Veterans Memorial and paying homage to his friends and all the others who did not survive.

The war was over by the time he met my mother in late 1975, and even more time had passed by the time I was born in 1977 and my sister in 1979. But it was always there just beneath the surface.

The war was there every time my sister and I fought to get our father’s attention, having lost his hearing from all the planes, or so he said. And it was there when my mother told us how she woke up with my father’s hands around her neck in the midst of a nightmare.

My sister and I would stumble across pictures of our father in uniform and ask about the men standing beside him, or we threw out questions about his many tattoos or the tapestry and paintings he purchased overseas. He never said much, and we couldn’t drag out any details.

One thing he said that stands out in my mind was how war protestors threw dog feces at them when they came home, how he was spit at and called “baby killer” and I’m sure many other things he wouldn’t repeat to us.

He told me he spent much of his time on base, but I was only a child, so I don’t know how much of what he said was to protect me. I never asked if he killed someone – I didn’t want to know if the man who read us bedtime stories, took us to amusement parks, and bought us Barbie dolls was capable of that. I still don’t want to know.

My father’s participation in numerous VFW functions served as another constant reminder of the war, and there were many evenings where my father traded stories around the bar while my sister and I watched television or played ping pong.

Every Memorial Day, we went from cemetery to cemetery replacing flags and putting down geraniums. We handed out poppies to remind people to remember the dead soldiers, and our minivan was covered in stickers insisting that those who were POWs or MIA would never be forgotten.

When I turned 16, I joined the VFW Ladies Auxiliary, and I marched in numerous parades behind my father, showing gratitude for all the men and women who served our country during wartime.

My father and I never had a real discussion about the war until I took an English honors seminar in college – Literature of the Vietnam War. I would come home every weekend, hoping my father wouldn’t be off at a VFW function so that I could tell him about the latest book we were reading.

I remember discussing the politics behind the war with him as I read Fire in the Lake by Francis FitzGerald. And when I pulled out my dog-eared copy of Tim O’Brien’s If I Die in a Combat Zone, Box Me Up and Ship Me Home, my father burst out singing the song that goes along with the book’s title.

He told me stories about escorting prisoners, one who slit his girlfriend from neck to navel, and another who jumped one of my father’s friends in the shower. He reminisced about a baseball game and how the site was bombed only a few hours after the last pitch was thrown.

We did most of our talking during trips to the grocery store, and I’m sure he told more stories, though I foolishly didn’t write them down. And I’m sure he took many more stories to the grave. I was only 22 when he died, and I thought I had all the time in the world to ask him more questions.

As I stood before the Vietnam Wall, watching people rub names on scraps of paper, I wondered what kind of person my father would have been had he not served in Vietnam. But I pushed that thought out of my mind as I walked along, running my fingers over names of people I didn’t know, wondering if by chance I touched upon a friend of my father’s.

As my swollen feet took me from one end of the wall to the other, I understood that my father had been willing to give up his life for his country. While I felt guilty that I was lucky and didn’t know any of the names on the wall, at the same time I was grateful that my father had lived so I could do the same.