A Stream of Stars...: Starcracker 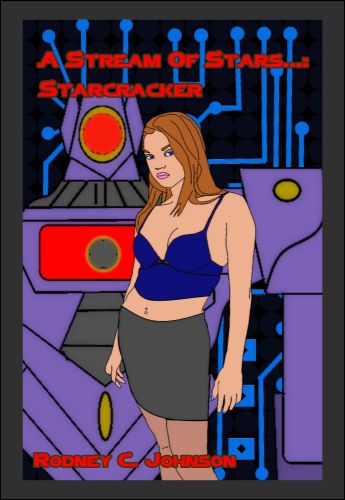 Vecron, and Veritraan Prime wage a game of Go. Openly, reconfiguring both the Falcanian and Morningstar peoples, so that they might become Lords of the Universe. Humanity’s future isn’t human and the Falcanians and Morningstars are tools to that end. The Falcanian Shotar has been assassinated and the Star Chasers have begun to rise up. A new player, Eden Rhys enters onto the gameboard, yet to her complete frustration, Eden discovers herself to be everyone else’s pawn.

[Numai. May 9, 2019]
“Allahu Akbar, death to all abominations!”
The Kalashnikov, SR-70 Taigan Pistol was an exquisite gunmetal-gray curve. A radical departure from the gunsmith’s classic AK-47. Semi-automatic, the SR-70 Taigan’s four heavy barrels fired a scatter of bullets, that hit with an explosive concussion.
Sikh soldiers, appointed by Raj Naresh Singh, to escort his Falcanian guests, who visited in order to inspect rebuilding efforts which they helped spearhead of the city that before World War III and its destructive bombardments had been named Mumbai. The Sikh, during the abrupt rumble of gunfire placed themselves between the lone attacker, shoulder to shoulder, beside Falcanian Drakorian Guard, ThunderStrike battledroids, and Valküri.
Nadia pushed past her own bodyguards, both Mecha and Valküri. During the salvo of gunfire, among those struck were her husband, Sharr Khan. Drakorian Guard immediately secured their Shotar inside an armored vehicle. Nadia noticed her Papa, Father-Creator, Dr. Turhan Korelia go down in a second hail of ammunition and realized Turhan lay dead, his stylish shimmery blue Nehru jacket reduced to a spatter of blood and gore. Probably the only thing that saved her husband, Nadia concluded, was that Sharr Khan chose to wear his formal armor.
Ignoring urges from her Valküri, to seek cover and the hulk of battledroids that placed themselves between she and the attacker, Nadia advanced on the enraged Muslim, who apparently wasn’t too keen on the genetically engineered Falcanian presence.
Bullets shredded Nadia’s babydoll sundress, slammed hard against her bulletproof body, leaving Nadia practically naked. She moved forward, unbound. Lissome tan synthetic gynoid chassis, turned impenetrable. Heads-up display zeroed-in on the assailant. Almond eyes glistened, bright-blue incandescence.
Wrenching the gun away, Nadia crumbled it and threw the broken SR-70 Taigan Pistol aside. For a moment, she considered the confused assassin. Evidently dumbfounded to discover Nadia to be more than flesh and blood. That’s because, Nadia had been manufactured of sterner stuff. Her embryo hammered from raidun90. A material comprised of no scant quantity of moissanite – Silicon carbide — Machine, given flesh.
The market street turned suddenly noiseless.
Nadia grabbed hold of Turhan’s murderer by his face, forced him onto his knees. Though he tried to fight back, her superhuman strength could not be matched by no less than that of her Morningstar brothers, or sisters. Lost to overwhelming grief, Nadia’s next movements were reflexive. Crush! The slightest pressure of her delicate, precision fingers and the assassin’s skull cracked. Killing him in one agonizing, bloody instant.

My Morningstar children call me Vecron, the Blue Ghost. Falcanians denote me as Ishbol, Guardian of Char’s watchtower. I stalk the electrical-quintessence, and exist within infinite, in-between space. Messenger of The Prime, by my skilled hands, did I recall It’s Kraksang back from oblivion. Now, the ‘Sunroids’ once more walk the Universe, albeit in a different configuration. You need only know me to be representative of that which is holy illumination.
— Concordance of Vecron Prime

[Falcanian Mobile Command Platform. January 1st 2035]
Imperial Strato-General Shuriken Kra stood at his conning station, and glanced across banks of monitors. His men dutifully prepared Intel. Data filtered into his large goggles, integrated into the various systems. Almost two years, he’d overseen the war as Supreme Commander. Ever since the new Imperator, Gaius Trajan fired the shot that restarted a conflict ended by a masterfully orchestrated peace treaty.
“Sitrap.” ISG Kra said.
“Sub-Strato General Temujin Sardur, reports forward movement in siege of Moscow.” Responded Sub-Commander Israduith Jarok. “City’s defense shields still holding, however, General Sardur is confident he’ll very soon break their lines.”
Shuriken Kra greatly missed Frederika, who’d long since left the field to help Sharr Khan recover from the odd cybernetic illness he suffered from. Yet, honestly, Shuriken felt more comfortable knowing Arshira was safe in her post as Commander of Homeland Security. Yes, he understood full well that the woman could take care of herself. That didn’t change the fact he worried for her. Perhaps Frederika might even convince herself it would be okay to have that baby she’d been wanting? Sharr, he knew would be more than pleased to help her out there.
The Russian theater occupied Shuriken Kra’s thoughts. Dmitri wasn’t half the tactician that the Morningstar portrayed himself to be. Temujin’s little war, provoked at Sharr Khan’s behest, in order to capture Natalia Antares, and the so called ‘Mecha Girl’, Eden Rhys thus far proved to be going well. Victory appeared impending. Shuriken Kra’s bigger problem, was yet another Morningstar, who fought proxy for the Imperium: General Mufasa Taharka.
“Sir! Code Purple alert!”
“I’ll take it in the war room.” Odd, Code Purple was a highly secure channel. The Shotar ever only used it for the direst of situations. Shuriken punched his ID number into the computer and the holoscreen came to life with Chancellor Trakan’s typical dour image. “Shreik. I expected Sharr –”
“Shuriken, it’s my sad duty to inform you, our Lord,” he stumbled, reluctant to say the words. “Sharr Khan Mingh Drakonis, has been murdered.”
“Murdered?” Shuriken pulled off his goggles, lurched backward into a chair. “By who?”
“The clone, Aria…” Chancellor Trakan wearily told Shuriken. “Purely a domestic matter. We are keeping the details, hushed.”
That didn’t much surprise Shuriken Kra. Aria and Sharr Khan’s relationship, had been destined from the start to go wrong. That she murdered him, somehow did not shock Shuriken. The ISG thought he himself should have dispatched the clone when Oberon Kreis, brought her to Vorkrür Island as a ‘gift’ for Sharr. But, what’s done, is done.
“You’re to be recalled to Vorkrür, at least for the duration.” The Chancellor nodded. “There are affairs of State which need my attention. I shall see you soon.”
Shuriken pressed a button on his desk: “Sub-Commander Jarok.”
“Yes Sir.” The Mobile Command Platform’s XO answered.
“Have a transport ready, I go to Vorkrür.”

[Narshin Thryak Palace]
“Never thought we’d lose him like this. Und soon, after Oberon…” Whenever she became upset, Arshira’s German accent thickened. “I always thought, Sharr Khan would be an old man, dying surrounded by a bevy of young women und his brood.” That thought caused Arshira to almost half-smile. “Or walking off into some great wasteland, to become stuff of legend.” Sighed. “This, it’s so banal. Unbelievable.” Nervously Arshira bit her lower lip. She hadn’t yet allowed herself to cry, not like Nadia and Shalimar at least. The Valküri felt she must remain stoic. Sensed major changes ahead. Anger built up in her heart. As each hour transpired, Frederika became colder, and began to fear her own fury. …