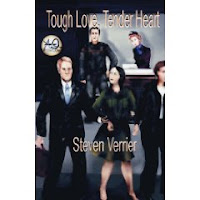 I’ve been writing seriously since I was a teenager … first songs, and then I got hooked on prose while attending university … thanks in part to one of the greatest teachers I ever had, Prof. Frank Ledwell of the University of Prince Edward Island, Canada, who mentored innumerable young writers during his distinguished career there. After completing undergraduate studies in Canada, I spent many years living and working overseas, particularly in Japan. Somewhere along the way I earned graduate degrees at Columbia and the University of Iowa, and I continued to write … getting some short plays published, along with articles and a nonfiction book titled RAISING A CHILD TO BE BILINGUAL AND BICULTURAL, based on my and my Japanese wife’s experience raising our children to be fluent in both parents’ native languages and cultures. More recently I’ve been concentrating on fiction, and my first novel, TOUGH LOVE, TENDER HEART, was released by Saga Books earlier this year. A second novel, PLAN B, will be published by Saga Books in 2009.


It's rare today to find an author who does nothing but write for a living. Do you have a 'real' job other than writing, and if so, what is it? What are some other jobs you've had in your life?


Steven Verrier: What job haven’t I done? Overseas, I worked mainly as an ESL teacher and college instructor. I’ve done a little of this and a little of that. I’ve been an editor, a laborer, a fundraiser … you name it. Currently I’m working as a high school English teacher.

Have you always wanted to be a writer?

Steven Verrier: Pretty much … at least since I was a teenager. I’d say it was less a case of wanting to be a writer than discovering I was a writer and had better follow through.

Tell us a little bit about your book/s.

Steven Verrier: TOUGH LOVE, TENDER HEART, though not my first published book, is my first published novel. It’s the story of Don Fisher, a middle-aged misfit—just about everything has gone wrong in his life—who finally meets the sort of woman he’s given up on ever meeting. This happens while he’s on vacation in Venezuela. The woman, Ana, is Colombian, working as a waitress in Caracas, and while the two don’t exactly have a storybook romance, a child is conceived during Don’s vacation. He doesn’t learn this until he’s back in the States, but from that point on his energy is directed toward marrying Ana and bringing her to live in the US. Little does he realize the obstacles US Immigration is about to put in his path. As the back cover of the book says, “TOUGH LOVE, TENDER HEART is a stirring, fast-flowing depiction of love trying to take root in an impossible situation, and a tale of unsurpassed relevance to our cross-cultural and post-9/11 age.” I’ve worked very hard to try to make the book live up to that.

Are you currently working on any writing projects our readers should watch for release soon?

Steven Verrier: PLAN B is a story about a teenager who’s—pardon the language—screwed by the public education system but doesn’t take being screwed lying down. Saga Books will release this second novel of mine in 2009.

What type of music, if any, do you listen to while you write?

Steven Verrier: My favorite is country music, though I write in silence. The good songs out of Nashville—unfortunately, not the majority of songs on country radio—are the best-crafted music around. I’m talking about songs like “Friends in Low Places” and “Bless the Broken Road.” I’m a huge fan of real craftsmanship. I write songs, too, and you can listen to a few of them on my myspace page (accessible through stevenverrier.com).

What one thing are you the most proud of in your life?

Steven Verrier: For sure, my children. It’s a messed up world out there, but my four sons are on their way to making a positive contribution.

Steven Verrier: I was born in Michigan and raised in a small Canadian town. I hold US and Canadian nationalities, and maintain a footing in Japan as well, as my wife and two of my sons were born there. Currently I’m living in San Antonio. I’ve lived here and there … in New York, Tokyo, Mexico, Toronto, Vancouver, and other places … and prefer to have one foot in the city and another in the country. Tokyo and New York are particularly special places, and I wouldn’t be a bit surprised to find myself living in one or both of those cities again.

Bring us into your home and set the scene for us when you are writing. What does it look like? On the couch, laptop, desk? Music? Lighting, handwriting?

Steven Verrier: Out of necessity, I write wherever I can. With small children climbing over me and a million other activities going on when I try to write at home, I often carry my things to whichever part of the house seems the most writer-friendly at that moment. And I write out every first draft in longhand.

Do you watch television? If so, what are your favorite shows? Does television influence of inspire your writing?

Steven Verrier: It comes down to craftsmanship. If a program is well-crafted and has compelling characters—shows like “Seinfeld,” “Cheers,” and “Hill Street Blues” come to mind—it can influence my work. For sheer entertainment I like the Chef Ramsay cooking shows. And I loved the concept of “American Inventor.” I wonder what happened to that show.

What is your main goal or purpose you would like to see accomplished by your writing?

Steven Verrier: My aim is to establish a significant career … to entertain, challenge, and inspire readers. I hope to hook up with a larger publisher down the road, and I’d love to see some of my stories put to film.

Have you ever had a character take over a story and move it in a different direction than you had originally intended? How did you handle it?

Steven Verrier: This happens all the time. Once a character has a mind of his own the writer has two choices: let the character go or prepare to engage in a battle of wills. The most compelling characters, I’m sure, are those who lead their writers along, and not vice versa. Watching your characters develop is a lot like raising your kids, and you don’t want to turn things sour by holding on too tight.

It's said that the editing process of publishing a novel with a publisher is can be grueling and often more difficult than actually writing the story. Do you think this is true for you? How did you feel about editing your masterpiece?

Steven Verrier: This was a bit of a strain. Along the way my manuscript came back with a lot of “corrections” I didn’t see as improvements at all, so much of my final proofing just consisted of putting certain passages back in their original form. I use an economical style, and I’d already done enough editing—cutting out a lot of pages—that I thought pretty much every word that remained was the best one.

Now, use this space to tell us more about who you. Anything you want your readers to know?
I’ll be around for the long haul trying to carve out a significant writing career. I appreciate every little step along the way, and I appreciate every little bit of support I get. For information about TOUGH LOVE, TENDER HEART or about Steven Verrier, visit stevenverrier.com, and drop me a line telling me what you think about this book!

Thanks so much for this opportunity to introduce myself and my work.