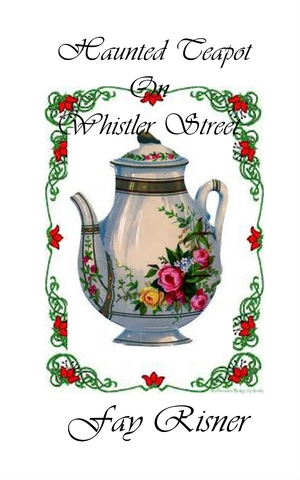 Sometimes writing short stories seems as hard to write when trying to keep to a word limit as writing a book. When a theme is needed for a short story that's to be submitted to a contest that makes my mind search even harder to come up with the story.

I entered the short story Teapot On Whistler Street, which I have enlarged for this book, in the Arkansas Writers' Conference in 2004 in the Geneva Crook Memorial category.

Tea Was A Predictor Of Many Things

In days gone by when brewing a pot of tea, all sorts of predictions were made. If the lid of the pot was inadvertently left off, then a stranger was expected to call at the house.
If you forget to put the tea into the pot before pouring in the boiling water, it was a very bad omen indeed. The rest of the day you would wait for something to go wrong.
If you make the tea too weak, you would lose the friendship of someone close to you. You never wanted that to happen.
If you brewed it too strong, you would make a new friend. So bitter though the tea was, you eagerly awaited the appearance of this new friend.
And it was very unlucky to stir the tea in the pot. If you did you would certainly quarrel with someone.
Synopsis for Book

Anna Winters buys the cottage of her dreams. The yard is full of blooming roses which lends color and fragrance to the place. When her elderly mother, Joyce Winters's dementia worsens, Anna takes her in. From the start, Joyce says the house has bad vibes and doesn't like living there. When she finds a china teapot covered with roses at the back of her closet, she is adamant a woman named Emily wants the teapot placed on the fireplace mantle. One night behind Joyce's closed bedroom door, Anna overhears her mother in a conversation about the teapot with the imaginary Emily. She worries about her mother's failing mental health. To prove her mother is imagining Emily, Anna investigates the house's previous owners. She finds thirty years before a woman named Emily Carson owned the house. One old newspaper in the library's archive has the front page headline Emily Carson Murdered In Her Home. Town's First Murder In A Decade. Does the teapot have the power to present its deceased owner, Emily, to Anna's mother? Is there really a Haunted Teapot On Whistler Street?

paperback in Barnes and Noble
ebook in Nook

paperback and ebook sold on smashwords.com