On The Trail of Delusion by Fred Litwin

Revealed – the truth surrounding the conspiracy theories behind the assassination of JFK. 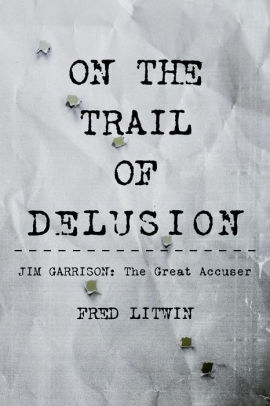 Sometimes childhood events can trigger a fascination which lasts a lifetime, and this was certainly the case for Fred Litwin, the author of this intriguing book. He remembers the day President J. F. Kennedy was assassinated clearly, however as a seven-year-old child he would never have imagined that the assassination would evolve into a lifelong obsession to discover the truth behind who the killer was if there were indeed more than one, the motives, and the shooter’s location.

Fred Litwin has had a very successful business career, then in 2000 he founded NorthernBlues Music, and in 2007 he started the Free Thinking Film Society which showcases films on liberty freedom, and democracy. He has written articles, and in 2015 he published his first book, Conservative Confidential: Inside the Fabulous Blue Tent. Then in 2018, he published his second book, I Was a Teenage JFK Conspiracy Freak, in which he told the story of Clay Shaw a well-respected gay gentleman who was relentlessly hounded by the New Orleans District Attorney, Jim Garrison.

In “On the Trail of Delusion,” the author exposes in great detail the truth about Jim Garrison and the conspiracy theories he has expounded over the years. But firstly let’s find out about the man himself. Jim Garrison was born in Iowa in 1921, and served commendably in WWII and became a Master of Law in 1950. However in 1951 when he was called to duty in Korea he had difficulties, was treated for exhaustion, and was discharged for physical disability, the psychiatric report stated he had “a severe and disabling psychoneurosis of long duration. It has interfered with his social and professional adjustment to a marked degree.”

When Garrison assumed office as the New Orleans District Attorney in 1962 he wanted to expand his political power base and be an instrument of reform. In August that year, he decided to clean up vice in the city, and the D.A.’s office and the police issued a joint statement that “targets will be police characters, homosexuals, B-drinkers, prostitutes and narcotics violators.”

It is then that he takes an interest in the J F Kennedy assassination and accused homosexual Clay Shaw along with Lee Harvey Oswald, David W. Ferrie, Jack Ruby, and others of plotting to assassinate John F. Kennedy. The link being that Lee Harvey Oswald had spent five months prior to the assassination in New Orleans. The cruel, relentless persecution of this innocent man makes hard reading. It is heart-breaking to read transcripts of interviews of Clay where he tells of the social stigma and prejudices which he had to endure, simply because of all the fabricated lies. What is even more tragic is that Clay, as time went on suffered terribly with lung cancer, and even after he was buried the persecution continued.

Fred Litwin must be given great credit in exposing Jim Garrison’s terrible behavior against Clay Shaw, and the injustices he carried out against him, in his last book, and also in this one. However, in addition to this, after examining even more documentation, the world can now read, through transcripts of interviews and tapes, letters, memorandums, and more, the stories of the other people Jim Garrison went after, and the unorthodox methods he used to gain evidence against them.

As Fred Litwin says “Several recurring themes colored Jim Garrison’s investigation – his mental illness; his bizarre investigative beliefs; his attraction to conspiracy theory; his irrational leftist politics, and his endless paranoias.” Within these pages, the truths are exposed, and all the information you need is laid before you.

I highly recommend this fascinating book as the definitive guide to the truth behind the conspiracy theories concerning the assassination of President John F. Kennedy. Highly recommended!