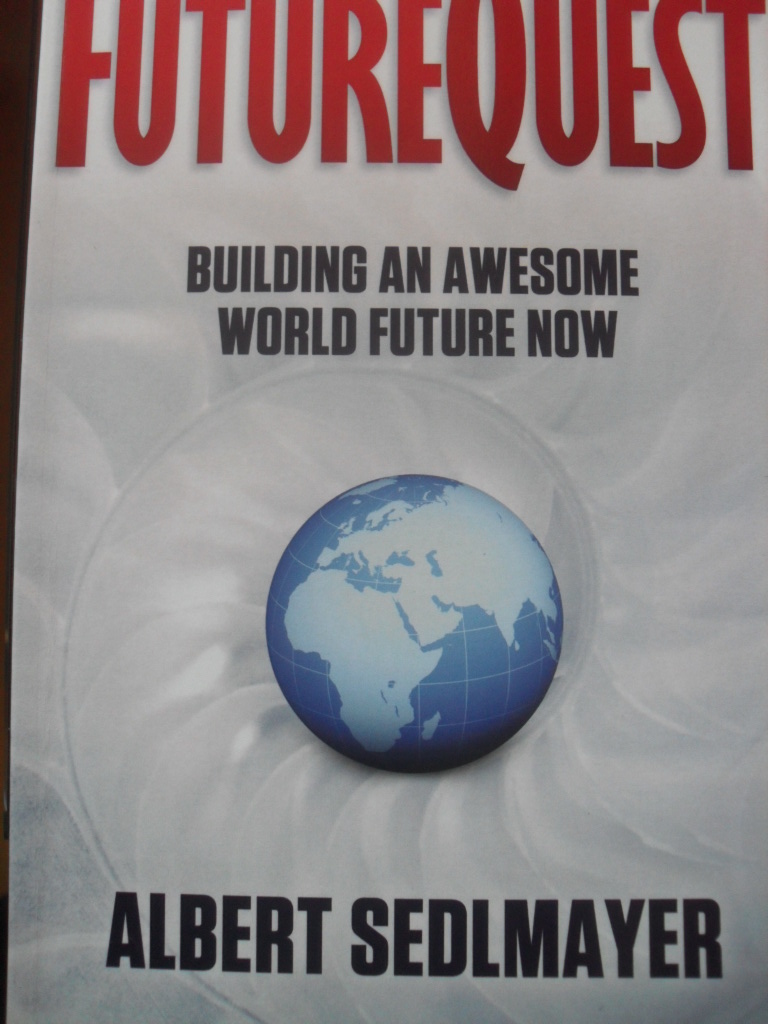 Can you write about world peace and how to change the world? There have been politicians who've had a vision or a dream of a change in the society and set about achieving their goals. The author Albert Sedlmayer mentions that his Dad was a natural problem solver. 'Genetic predisposition,eh?' you might ask.

He was his mentor and intrigued him with how he'd study a problem, walk away; then come back with a solution and a broad grin.He passed that ability to his son. In the Forward Martin van Kalmthout, a prof from Netherlands, mentions the importance of the human factor involved in decision-making at different levels, and their interrelationship. The author supports the assumption that all endeavours to promote world peace should start at the psychological level. Depending on the integrity of the person or persons involved.

In the case of the Crimean crisis, Putin is an ex-KGB man and the President of Russia. President Obama cuts a better figure with his academic credentials. World change can be achieved on an individul scale, when the individual is ready to change within, says Sedlmayer. World change is individual change. That brings us to the state.

What is a state law? A decision made by a group of people who have the same thought is turned into a law in print. It's the human factor that links many The written world rules over citizens throughout the world. All this preceded by the thoughts of individuals who wanted to form a decision. It's the human factor that links many disciplines and lines of thought together.

This book gives practical tips to help the reader avoid being bogged down with theoretical discussions. A valuable book, a book worth its money, for those who are concerned with decision-making about the future of mankind. The author has a deep, empathic insight which has enabled him to write Future Quest, a book that provides supportive arguments that a great, sustainable world-future is achievable through the implementation ofthink-alike mentors as multiplicators. Sedlmayer has a good idea, so why not help spread it?

Sedlmayer also says: if people avoid you, why, you've overdone it. He mentions that ethical philosophy should be compulsory in the curriculums of schoolkids or you should teach your child yourself, after the principle: what you do is more important than what you say. If you've made a mistake? Apologise. That's exactly what Dale Carnegie also says in his book 'How to Win Friends and Influence People.' The church has been preaching this but some bishops remain adamant, for instance van Teberts in Bavaria. Are you involved in a confrontation? Be diplomatic and humble. Whether this will really help as in the case of the Crimean conflict is another matter. But a policy of deescalation does get better results than sabre-rattling.

Sedlmayer urges you to become a mentor by keeping good company and being a role-model (Vorbildfunktion) and says what you do is do is important, especially when you have young people looking up to you. That's general psychology and common sense, you might retort. Dale Carnegie devotes a chaptergeyou

on 'give a dog a good name' and treat ex-jailbirds as humans, with respect and they'll take up the challenge and behave well. Likewise mentors should admit their mistakes for they are humans and thus fallible. Much like Carnegie, he says self-disclosure is a gesture of good will and confidence. It works wonders and disarms the other person and leads to a good, hearts relationships and cooperations in life with other human beings.

In a chapter on Orientation he writes about the dream, just what is reality anyway? He defines the task at hand and talks about thinking in circles, cycles and spirals. The entire book has a navy architecht's stategic approach. He designs the structure and shows the steps to attain it. Then he moves to Man, the individual and the threats to his existence, coexistence, talks about the sanctity and value of friendship, values, consolidating your values and not your valuables, emotions, perceptions and core identity. Sedlmayer moves on to cultures, countries, collectives, and arrives at groups, and speaks of colonisation in today's context. War and peace, national identity, protection---all play a big role. He explains the three R's: reading, writing, arithmetic and adds responsibility to it. And hoovers around mentorship, devoting a section to humanity. As you can see, a many faceted opus magnum.

I remember that a NY socialite and novelist of Indian descent named Bharati Mukerjee, who has on an academic visit to Freiburg (Germany) asked me, 'How does it feel to be a writer and poet in Germany? How do you get along with the Teutons?' In Albert Sedlmayer's case it was difficult as the son of a pair of World War II survivors who had to endure 'defeated foe-taunts' as German immigrants in Down Under at the hand of the Aussies. He describes it as a brutal era as a kid and vainly expresses his hope that somebody'd fix it someday. But as he grew up in Adelaide, he realised that conflicts were an everyday issue throughout the world; it developed into a life-long questioning interest on how they could be resolved. As a man with experience in counseling, he sat down to write this book to 'fix the brutality' in this world, as he puts it. He quotes Margaret Mead, the cultural anthropologist, aptly: 'Never underestimate the power of a few committed people to change the world, it is the only thing that ever has.'

Albert Sedmayer was born in war-ravaged Germany in 1946 and went to Australia with his family when he was six.

This non-fiction book reads like a first-person narrative on the future of mankind and shows the way with practical tips that help you when you're dissatisfied with theoretical arguments in the fields of psychology, philosophy, business, law, finance, management, politics and democracy, all linked together by the human factor. The book has an impressive bibliography with 342 books and papers on diverse themes that culminate in his postulation that peaceful, sustainable humanity is possible. He shows you how you can participate in attaining the goals set in FutureQuest wherever and whoever you are 'without compromising your identity or your religious or ideological convictions (sic).'

The author quotes Sir Francis Bacon's 'Knowledge is power' (Wissen ist Macht) and emphasises the importance of communication, explaining it in terms of electricity. If communication is weak, power can't flow between person to person and nation to nation. On the chapter on Communication he cites Martin Luther King, Jr:

'People don't get along because they fear each other,

People fear each other because they don't know each other,

They don't know each other because they have not properly

communicated with each other.'

The chapter on Information Technology explains how easy and cheap the internet has become and even India's farmers can negotiate a fair price through the use of mobile phones by enabling direct links with the consumers.

The fact that the author spent life-periods immersed in the diverse cultures and attitudes of different countries has led him to attain a high level of intercultural competence, and the ability to solve complex and difficult problems. He has a good insight towards humanity, and is of the opinion that a great, sustainable world future is available. He has used information-age-power in writing FutureQuest after years of soul and data searching.

With wars and military conflicts, communal hatred erupting around the globe, and the climate change discussions, Sedlmayer's book is like a lighthouse in a stormy sea warning the ships to keep off the treacherous cliffs. His idea is to start tentatively a Goodwill Register within the Un framework, akin to the UN Global Compact, with the possibility of adding new registered, charitable, non-prophet and non-profit organisation, possibly with the blessing of the UNO. All members 'will periodically be peer-audited to maintain membership, an attempt to keep out the black sheep. What the author offers is a 'cheaper and easy to administer' version of the UN Global Compact. Savvy membership?