Fascinating tales of moments and events which changed history. 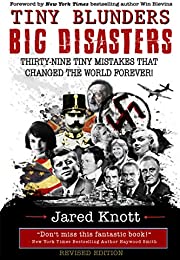 If history books were all written like this one, there would be many more people interested in the subject; it’s simply fascinating!

Meticulously researched, the author, Jared Knott, entertains his readers with incredible examples of disasters which have occurred throughout history. Skilfully written, he illustrates wonderfully the consequences of the butterfly effect of tiny blunders, accidental changes in plans, and not so good intentions have changed the course of history for people, countries, and indeed in some instances, the world.

I studied Modern History and knew the details of some of the events he writes about. Yet, he has uncovered tiny details, omissions, or slight mistakes which occurred at the time, and in telling them, reveals how these moments in time had enormous impacts on our world today. I love the quotes he uses throughout, however one especially highlights the message that we learn by our mistakes.

Whatever period of history you are interested in, there will be a story to entertain you, proving in the immortal words of Robert Burns written in 1785, “best-laid schemes o’ mice an’ men / Gang aft agley [go often awry].” Personally, I loved reading the chapter on sibling rivalry, discovering sibling pairings which I never realized, and marvelled at the rifts which are created in families, and which in some cases last a lifetime.

Jared Knott is a father of five and he lives with his wife, Kathryn, in the Atlanta area. He is a decorated war veteran who went on to have a successful career in sales and marketing, and the home improvement industry. The author of numerous articles on a variety of subjects, “Tiny Blunders/Big Disasters,” is his first book and one which I recommend highly as not only informative but extremely entertaining.


Jared Knott has had numerous articles published in the Mensa Bulletin and in graduate school textbooks on subjects ranging from Supreme Court Reform to Arctic Exploration. He was a decorated combat infantry officer in Vietnam in the First Air Cavalry Division. In his civilian career, he has served as a vice president of sales + marketing and marketing director in the home improvement industry. A father of five, he lives in the Atlanta area with his wife, Kathryn.

The small things that had great historical consequences…

How often does it happen that a single tiny mistake causes an entire civilization to collapse? More often than you think! Readers of Jared Knott’s book, Tiny Blunders/Big Disasters, will be amazed at the little things that changed history in a big way. Here are a few examples: