What Empty Things Are These by J. L.Crozier

An incredible journey back in time to Victorian England. 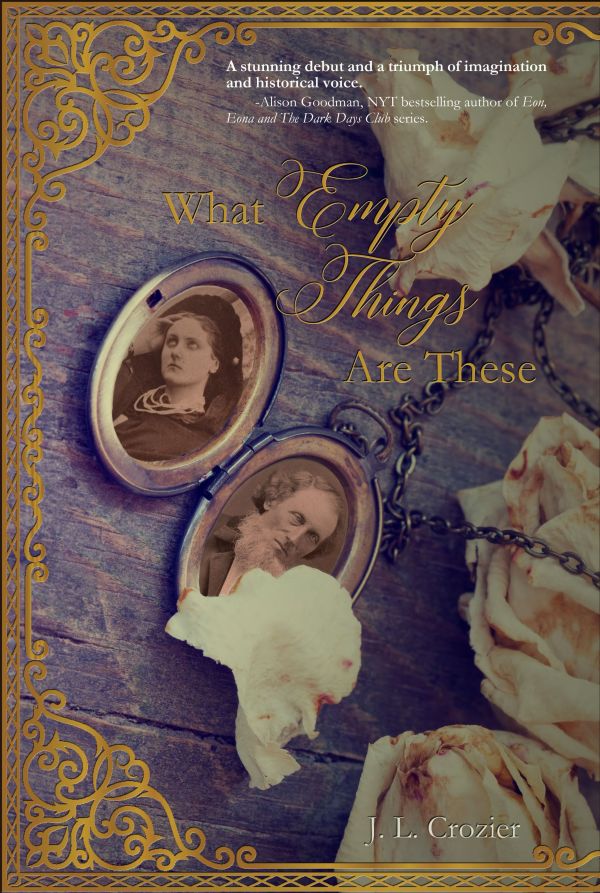 Readers of this captivating historical novel are taken by its author, J. L. Crozier, on an incredible journey back in time to Victorian England. With a fascination with English history, the author as a Masters in Creative Writing from Melbourne University, and has also won awards for short stories. Born in Malaya, after having lived in south-east Asia, Burma, Vietnam, and Australia, she now lives in France with her sons.

The time is 1860, and young Adelaide Broom is like other girls of her era, shy, yet dreaming of romance and the handsome young men who she meets and dances with, whilst being carefully chaperoned. However, she soon discovers that her fate has already been decided, she is to marry the elderly, respectable friend of her fathers, George Hadley. In this strict period of history she does her duty, yet, inside she has a spirit which is expressed in her secret writing, a pastime which allows her to pour out her feelings, and observations, unrestrained.

It is Mr Collins’s sensational (at the time) novel, The Woman in White, which is to lead to her husband’s undoing. Arriving home and furious at finding her reading something he considers so unsuitable he, as husbands had the right to do at that time, beats her. Ironically, it is this action which causes him to suffer an apoplectic fit, which results in him becoming comatose.

Suddenly the household is very different, and Adelaide has to learn to adjust to the changes in her circumstances. Now, with the support of her Ladies Maid Sobriety, this young wife and mother must manage everything, and keep up appearances, not only for herself, but also her eight year old son Toby.

However, as her horizons expands, she soon discovers the flip side to the perfect world she has grown up in. This is the one which lies beneath the silver and damask of the drawing room, and instead lives in the shadows and tunnels below London. In this world which reeks of deception, greed and treachery, her naivety is cruelly stripped away from her…

This story is more than a story, it’s a real experience! Through the authors vividly descriptive writing the reader finds themselves in Adelaide’s shoes, and the pages just come alive!


My first book was 30 pages long and cunningly reversed all my friends’ names to make the characters sound foreign. It worked quite well, I thought, but then – I was only eleven.

Until that point I had been living in south-east Asia – being born in Malaya during the ‘Emergency’, then living in Burma (where the Burmese army and Karen tribespeople fought their battles in our front garden on moonlit nights) and then in Vietnam in the 60s. You’ll recall the war there. My father was a mining engineer until Vietnam, when he, as someone who had worked in the region much of his life and perhaps because he’d a lot of experience in war zones, was employed as an advisor on aid to the Australian Embassy.

Nowadays, I live in France, having moved here after the necessary decades back in Australia doing a variety of things: lots of politics and work on policy, community work, studying and teaching creative writing (I hold a Masters in Creative Writing from Melbourne University and have won awards for my short stories), singing the blues and teaching singing, proof reading, raising my two boys… Why France? Because I went to a French convent school in Vietnam and it all seemed to make sense.

So how does an Australian who lived in south east Asia come to write a book based in London in 1860? Well, I love history, and Australians in the 60s tended to be anglophiles (my family was no exception). I had read my way through the British Council Library in Saigon from the kids’ section to the adults’, including some Dickens and Thackeray by the time I was nine. And I find that period fascinating still, foreign but deeply familiar, especially at a time when the #MeToo movement has hit with such force.

In 1860s Britain there is nothing unusual in a man beating his wife. When George Hadley’s aggression triggers his own stroke and coma, his wife discovers all she thinks of as hers is to pass to her young son Toby. Adelaide seems as powerless as her ladies’ maid, Sobriety.Beyond the strictures of domestic and social expectation, these two women of different class remake the rules to discover what lies beneath the drapes and tassels of Victorian Britain. Life, they find, is urgent, exciting¿ but cheap. Even as they adventure into alleyways, a tunnel and a séance, their innocence is gone.What Empty Things Are These is about what happens to women who look into the face of this newly industrialized and still patriarchal age. Change is everywhere, exhilarating, corrupt, terrifying. Fraud and farce abound. Spiritualists prey on the confused; women are encased in clothing that imply both modesty and sexuality; the powerful prey upon the weak. Adelaide and Sobriety, in their way, show us that every era has secrets that must be uncovered for real social progress.But the truth of the age is encapsulated for them, in the underlying tale of the vulnerable urchin girl, the nameless victim of this pitiless society.

What Empty Things Are These is available from Regal House Publishing: https://www.regalhousepublishing.com/product/what-empty-things-are-...