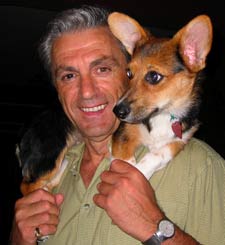 Florian Stone Wells has not received any gifts yet

Something About Me and My Book:
"The Sword and the Shield of the Realm" debuts Merchants of Time series, a seven-novel journey into the maelstrom that devastated Eastern Europe between 1448 and 1529.

Before the rise to dominance of Western Europe, there was a pivotal time in history when the world was consumed by the epic struggle between the Islamic Empire of the Ottomans and the Christian Kingdoms of Eastern Europe.

Two civilizations and two very different ways of life confronted each other. Those events shook the world and still reverberate in today’s headlines, with the fate of mankind yet to be decided.

A tale of mystery and suspenseful adventure, the series takes the reader to an epoch marked by turbulence and mayhem when, in the intricate tapestry of human history, many of the painful truths of our world took root.

I am a native of Romania, born in the largest city of the country, Bucharest, but the origin of my family lies in Transylvania, that legendary “Land beyond the Forest” which has inspired so many gothic novels.

My family had deep roots in the history of the land, with the early ancestors living there as far back as the 14th century. Sometime in the 15th century, perhaps during the reign of the most notorious character of Medieval Europe, known in history as Vlad the Impaler and in literature as Dracula, they moved into the mountains separating Transylvania from Wallachia and established a couple of villages on the southern slopes, not far from where the story in my novel begins. In saying that, I don't mean to imply that the family was of noble blood or of any historical importance, but they were very prosperous merchants of a potent moonshine, a plum brandy which helped those living in Transylvania and Wallachia keep an optimistic outlook throughout their calamitous history.

Like the decade in which I was born, the one that inspired George Orwell to write 1984, my life was harsh, but I was fortunate to spend a good part of my childhood in the same mountains where the ruins of Dracula's Castle remain to this day. At a very young age, I developed an avid interest in the Middle Ages and became a lifelong student of history. Throughout the Lyceum and College, my fascination with the Medieval Era evolved into a real passion for history in general and I expanded my knowledge with many years of study and research.

1968 was the year when a wind of freedom was in the air, a feeling of trust and hope inspired by Alexander Dubcek’s Socialism with a human face. But it was short-lived. When news of the invasion of Czechoslovakia by the armies of the Warsaw Pact, in which the Romanian government declined to participate, reached Bucharest, many students took to the streets and demonstrate in front of the Soviet Embassy. I was one of them and I was arrested. Marked as a subversive element by the Securitate, the state secret police, what followed was the bleakest period of my life, which I would later describe as my “struggle years” … read more at www.sapientus.com

After a ten-year hard-fought battle to escape the repressive regime of Ceausescu, I emigrated to the U.S. in 1977 as a political refugee. In 1984, I became a United States citizen. My struggle as a political dissident and as a survivor of the Cold War Era is an extraordinary story in itself and I have plans to put it down on paper …

Why write about the conflict between the Ottomans and the kingdoms of Eastern Europe in the 15th century?

In 15th century, the center of civilization in Europe was in the East not in the West. To be more precise, I am referring to the south-central part of the continent and the Balkans. For those who are a bit confused, it is the region lying between the variously and vaguely defined areas of Western and Eastern Europe, to use the terms of the Cold War and the Iron Curtain.

Now, imagine living in a world consumed by a war that lasted not Thirty Years, not A Hundred Years, but One Hundred and Fifty Years and had no end on sight. Imagine the war is not over the crown of the realm nor about who is taxing whom, but for the very core beliefs upon which today’s civilization was built. That world comes to life in the series Merchants of Time.

The series begins in 1448 and ends in 1529 with the first siege of Vienna by the Ottomans. It starts with the Ottoman campaign to eradicate once and for all the Christendom, a decision taken by Sultan Murad II after the Battle of Varna in 1444, an event referred to quite often in The Sword and the Shield of the Realm. The Battle of Varna triggered a drastic change in the Ottoman’s attitude toward the Christian World. Faced with what Sultan Murad II saw as a despicable betrayal of the peace threat signed with him only months before by the King of Hungary and Poland, a treaty signed at the Christians insistence on the Koran and on the Bible, the sultan decided that at the behest of Allah the Christian kings, usurpers who kept populaces in yoke, must be eradicated and their subjects turned to Islam.

Why the series is called "Merchants of Time"

The story of the epic struggle between the Islamic Empire of the Ottomans and the Christian Kingdoms of Eastern Europe is told from the perspective of a secret fraternity, the Excubitors, a brotherhood of counselors to kings, sultans, and head of churches, knights, scholars, financiers, and merchant adventurers who hold influential positions on both sides of the conflict. Understanding the grave danger in Sultan Murad’s resolve to eradicate Christianity and turn the world to Islam, they decided to intervene for the greater good of all.

The Excubitors are, perhaps, the “missing ancestors” of the Illuminati and Freemasonry of 17 and 18th century. The Excubitors do not command great armies but possess a broader understanding of the world and few “new inventions,” a powerful knowledge in an age when most kings were unable to read and write and books were considered treasures. Following their exploits, we learn that nothing in history happened by accident nor because it was predestined, but because individuals dedicated to the principle that in the interest of all no one should be allowed to absolutely predominate the world, raised against those driven by an uncontrollable desire of power and possession over all others. Thus, we learn that in the intricate tapestry of human history nothing is as it seems …

The Merchants of Time series is an attempt to remind us that the world of today, with all its benefits and tribulations, is but a product of the historical continuum. Through war, trade, and the will to dominate, humans have created it as it is. Everything that defines our time stemmed from the fears raised by the constant state of war between the Islamic Empire of the Ottomans and the Christian Kingdoms of Eastern Europe. The rise of the Ottomans led to the decline of the Roman Empire, and generated the shift in power from the East to the West. History records it, euphemistically, as the Byzantine-Ottoman wars, which lasted for a century and a half. Yet very little has been written in literature about it, especially in the last forty years, and only incidentally. Now, in every threat that looms in the future, we see the fruits of the seeds planted back then, with the potential of the most destructive war in human history threatening our future.
• What is the historical fundamental difference between Islam and Christianity and how it shaped the history of the conflict between their leaders and followers? Will this be the greatest issue of concern for our future?

A word of caution: Those who are tempted to say that history repeats itself, will do well to remember that this is a truism only as long as our motivations remain the same. I will say no more on the subject, for I don’t want to spoil your reading, but here are some teasers, which will take you through The Field of the Blackbirds and the End of the Seventh Age, the next novels of the trilogy which starts the series, and the tetralogy beyond:

• Why Constantinople fell to the Islamic Empire of the Ottomans in 1453? Was it a conspiracy to let the city that since the 4th century rivaled Rome as the spiritual center of Christianity be conquered by Sultan Mehmed II, an event no less momentous than the adaptation of Christianity as official religion of the Roman Empire?

• Why the Realm of Hungary, the most powerful kingdom in the Christendom, fell to the Islamic Empire of the Ottomans after the Battle of Mohacs in 1526? Was it the proverbial “sacrifice lamb” used by secret forces to save the West from falling under Islam?

• Who were the “missing ancestors” of the Illuminati and Freemasonry, the secret societies of 17 and 18th century? Did the Excubitors really existed, and how did they changed the course of history?

• What happened to the riches and the great wealth of artistic and literary treasures in Constantinople, the city described as the largest and the most splendid European city of the Middle Ages? How Templar Knights came to posses the Shroud of Turin?

• Why Pope Clement V suppressed the Templar Order? Was it because the Grand Master had declared his intent to form a Templar State in the East? Could it be that the Order took many of its treasures and relics in the lands where wanted to create its state?

• How the Islamic Empire of the Ottomans, which in 16th century spanned over three continents, controlling much of Southeastern Europe, the Middle East and North Africa, and dominated the shipping lines from Gibraltar to the eastern end of the Black Sea stirred the rise of Spain, Portugal, and in the end England as naval powers and empires?

I can keep on and on, but … many battles were fought, some in the open some in secret, and thus the world of today was shaped. Just remember that a greater insight and knowledge of our history perhaps will bring us that “ray of hope” which still exists even in the darkest hours.

Florian Stone Wells said…
I welcome anyone who wants to review my novel.

MERCHANTS OF TIME is divided in two parts:
A trilogy comprised of

END OF THE SEVENTH AGE
Scheduled for release in December 2010

And a tetralogy comprised of