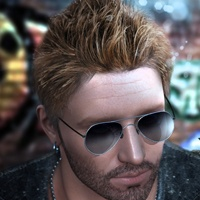 I am very honored to welcome May to The Vampire Chronicles Art Gallery. She was the artist that inspired me to be brave and ask fan artists to participate in this blog. This portrait of Amadeo is my favorite rendering of our beloved Gentleman Death.

I first found out about VC when I watched Interview with the Vampire on TV. I loved the whole story and mostly the characters; I remember I dreamed about Lestat for several nights, so I decided I had to get the book to know more about all this whole world created by Anne Rice. I read several of the VC and other related books, but not all of them because some were impossible to find in my country.
I think "Lestat the Vampire" is still my favorite, and that was my main inspiration to create a fanart depicting Lestat and Claudia as I envisioned them in the book. That was done in 2004 and I was still trying to find my CG style. I used Painter 7 and a little bit of Photoshop with a Wacom tablet, and I remember I wanted to try a different technique, so I just scratched the colors from the start and refined little by little, finalizing with a crosshatching technique to give some texture to the skin (a technique I still use until these days).
After that I wanted to create another fanart, so four years later I chose Armand as the next victim, since I adore his personality within that childish-looking body. I even looked for Russian models and embroidery from century 15 paintings as reference. I paid close attention to the skin and the clothing, so I was as detailed as possible. I wanted him to look young yet somewhat mysterious, just like Marius himself would have painted him.
Although I have just painted these two VC-related artworks, I've created my own characters inspired by Anne Rice's books, and I've been pushing myself to paint their portraits as close as possible as I imagine them. They all have very different and defined personalities, almost extreme and opposite from each other. Somehow they lack a strong background story that ties them all, but since I'm not a storyteller I stopped worrying about that.
You tan take a look at the rest of my artwork here: http://mayyeo.deviantart.com/

Today I would like to welcome Vampire Chronicles fan artist, Endymia. She's an old school Anne Rice fan like myself and her artwork is very popular at deviantART.


You can visit her gallery at: Endymiasyzgy deviantART
and follow her blog - Miss Clare Remembers.

I first encountered Anne Rice and her work a decade ago in a public library while I was studying abroad. My first taste was “Interview with the Vampire” translated in Japanese (the library was big enough to have international language section!). I vividly remember the picture of gorgeous blond vampire used for the cover, later found out was a picture of Lestat played by Tom Cruise lol ! I remember I was so excited about discovering this novel, I tried to tell all my friends how brilliant it was. Soon after I finished her fist book I watched the film with my friends, and started to read rest of the VC novels first in English and then in Japanese. (It really helped me improve my English which was a bonus!)

I managed to hook my best friend into Anne Rice VC world and both of us being arty we started to do a scrap book/ art journal. We had two leather cover journals (inspired by Pandora’s note book ) which later we named “A” and “P” book. We used to swap these two journals every month or so to do few pages of art or story or anything we fancied related to Anne Rice novels and her characters, sometimes we worked on same pages. Coming from Japan I knew how to draw comic/manga style art but didn’t know how to do collage or realism…and opposite could said about my friend who was brilliant with collage and scrap book style art work but unfamiliar with idealized line art like Japanese manga. We both experimented and learnt unfamiliar styles from each other and sometimes we played with techniques we learnt from our Art class. 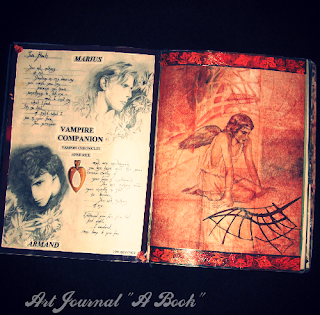 I love using good old pencil for my medium to start with. If it’s realism I’m after I only put the hint of color with water color or color pencil. As for manga art I use pen and ink, I color it with water-base marker pens and ink and go over the line with dip pen. Our fan arts stopped around the time we got in college but recently I started to draw VC art again, due to a younger, newer audience on Deviant Art site, who seems to enjoy my old VC related arts and adore Anne Rice world as much as I used to back when. Nowadays other than the traditional media I also use Photoshop for quick colorings. It opened whole new possibility for me, as CG art provide you with textures and blushes, that’s hard to apply with manual technique.


Here are some of the old and recent art works… for more VC art please visit my Deviant Art page.


I want to welcome the Vampire Chronicles Art Gallery's first guest fan artist, Omri Koresh! I was introduced to Omri through his deviantART account and couldn't believe the level of sophistication he brought to each portrait. My personal favorite is this piece of Maharet and Mekare. Please visit Omri's gallery to view more of his beautiful art!

Howdy ya'll! my name is Omri Koresh and i am a digital painter and a traditional one too, right now i'm working on my BFA and it's very very very boring but i'm still having fun at the process of things.

so.. the vampire world of Anne Rice is the true nature of human beings the books feel natural and pure and the character's almost mortal feel that you get from the books but as well the way the characters act and the world around them makes them feel so alive and so real that i just knew i had to paint a whole series of her characters. i felt as like i already knew them which is a strange feeling exceptionally because they are fiction and not real people.

right now i'm using digital art, a Wacom Tablet, intrus4, it's just great i want to marry it - and photoshop for painting.  I use photographs for reference for anatomy and all that stuff, just like everybody else. i use digital because first off i'm a student and i don't have money for anything what so ever so it saves me money and as well it's a fun and easy process than to mess with that yucky turpentine.

I. LOVE. LESTAT. really, that's how it began, actually i have to admit i saw the movie first and i must say Antonio Banderas felt So wrong even before i knew Armand but i just loved Lestat's character so when i started to read the book i understood something. i LOVE him, such a fanboy, yes, true. so i painted him. after a year i fixed him up, then again, and now you are seeing the sixth version of Lestat, it's the best version so far, i really tried to define his face correctly of how i see him in my mind, and to fix the horrible anatomy he had at the start, and then i painted more characters, you can see the twins here, i thought a simple portrait will be so nice because they Are beautiful and again i'm giving you a picture of Lestat because it's my final pic for the series and as well my personal favorite, although now i can paint blood so much better.

i'm still thinking getting back to that series, i basically finished it, i got i think 12 works, i want to add some more, doesn't feel enough. there's more to tell. the vampire world interests me because it sounds familiar- the sun is annoying! it's so freaking happy and yellow, just too bright! i sleep at day and awake at night, it's always been like that, and it's getting worse unfortunately, my mom is the same as me but she somehow got over it, well anyway i love the violent part of vampires, they are beasts but yet very intoxicating and beautiful and they are so much deeper because they experienced so much more than a mortal could ever go through. the dark and the blood and the steaming stories are just a breath of air, for me at least.

if you guys didn't know there is a game called "VTM: Bloodlines" its about vampires, Google it, it's a cool game that somewhat reminds me of Anne Rice's world, i suggest it.

if anyone wants to contact me, about anything you can at koreshomri@gmail.com (: if you are a member of DA you can join us at our Anne Rice Chronicles group at
http://anne-rice-chronicles.deviantart.com/

Uncle Tommy with Quinn:
"He nodded. 'I'd save Dürer,' he said. 'Salvador Mundi - you know, the face of Christ with the hair parted in the middle.'
"'Thats a good choice," I said. 'Maybe much better than mine.' I hesitated. We'd come a lot further in the conversation than I'd thought possible when I drove out here. 'Listen to me,' I said. 'Would you like to go off to a good school, a boarding school, you know, get a fine education, get out of here?'" (BF pg.342)

Urban has not received any gifts yet

Night is a world lit by itself. So are romance novels. ~ Urban!

Something About Me and My Book:
Author of Romance novels, parnormal romance, western romance. Web designer and love reading books Thanks for connecting! If you want more promo opportunities, chk my new site at http://naughtyreaders.com - grand opening is Dec 18-24 and we have ad specials going on now!

Hello . My name is Fernando Sobenes and I want to invite you to read the prologue and the first two chapters of my novel: "The Evil Visitor" in my blog The Evil Visitor