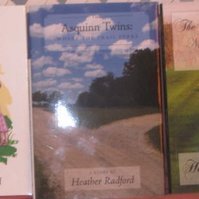 Results of me entering my poem in a poetry contest

Grace Brooks has not received any gifts yet

Something About Me and My Book:
Actually it's a series. The Asquinn Twins series is wholesome reading for the entire family.

Snow Queen is a sequel to 'A Dog For Keeps.' This time Ivy Herman is asked to sell her entire team when her father, a Chief Parks Ranger, is transferred. Ivy wants to sell her team of five Canadian Eskimo Dogs to one owner. At last an offer comes from SunDog Kennels owned by Owen Winschell and his son, a father/son kennel operation in Ontario. Ivy checks out the Winschell family and decides they are the people she would allow her dogs to go to.

Soon to be released by LisenUpAudioBooks

I couldn't find your books on the Turner Maxwell url you provided. However, I did find other buying options on Google. Can't wait to get my copies. :)