P.D. Workman has not received any gifts yet

Something About Me and My Book:
P.D. Workman writes riveting young adult/suspense fiction about mental illness, addiction, and abuse.

For as long as P.D. Workman can remember, the blank page has held an incredible allure. After a number of false starts, she finally wrote her first complete novel at the age of twelve. It was full of fantastic ideas. It was the spring board for many stories over the next few years. Then, forty-some novels later, P.D. Workman finally decided to start publishing. Over the years, family and friends encouraged her to, but she wasn’t yet ready to take that leap.

P.D. Workman is a devout wife and a mother of one, born and raised in Alberta, Canada. She is a homeschooler and an Executive Assistant. She has a passion for art and nature, creative cooking for special diets, and running. She loves to read, to listen to audio books, and to share books out loud with her family. She is a technology geek with a love for all kinds of gadgets and tools to make her writing and work easier and more fun. In person, she is far less well-spoken than on the written page and tends to be shy and reserved with all but those closest to her.

Looking Over Your Shoulder

Just because you're paranoid, that doesn't mean someone isn't out to get you.

Things were going well for Abe. Despite all of his past struggles with mental illness, he was happily married, had three wonderful children, a nice home, and a fantastic consulting business that satisfied his creativity and brought in a good income.

But you can never get too comfortable. When Abe becomes a prime suspect in a jewel heist - one of the largest successful jewel heists in history - his schizophrenia becomes unmanageable and everything begins to spiral out of control. Abe's own investigation into the heist has the jewel thieves hot on his tail... but are they really, or is he just losing the battle against his inner demons?

"I was drawn in from the first page and couldn't put Looking Over Your Shoulder down . . . [it] kept me guessing and on my toes."

"An exciting ride that keeps you guessing right to the end."

". . . a sensitive and uplifting look at one family's efforts to triumph over the adversity of mental illness.”

Everyone knew that he was a good guy; geeky, responsible, hard-working. Henry has had a lot to deal with in the past. Now, as he should be focusing on his schooling and preparing himself for the future, he is hindered by abuse, the challenge of raising his baby brother while dealing with his mother’s deep depressions, and the return of a ghost from the past Henry has tried his best to forget.

But it seems that Henry can’t avoid the nastiness of life. As hard as he tries, it’s one more disaster after another as his life spirals out of control.

Can Henry escape the darkness, or is he doomed to be consumed by it?

'I was caught up in the twists and turns of the plot from the beginning of Deviation and was still surprised at the end.'

'This book could actually happen. That is what makes it so scary! I am really looking forward to the next book in the series. I am thoroughly intrigued and want to see what happens next.'

'“Deviation” will play on your emotions and feed your doubts as you follow Henry though his many troubles and trials.'

Ruby, Between the Cracks

If you asked Ruby, she'd tell you she's happy with her life. She's tough and independent and doesn't depend on anyone else. The road that has led her here has not been easy, and she's blocked a lot of it from her memory.

But things aren't as rosy as she would have everyone believe, and the road ahead of her is filled not only with gangs, drugs, and depression, but other challenges that Ruby hasn't even imagined.

—You know it’s a great book when you have to keep reminding yourself that the characters are not real people. I really cared about Ruby, and she gave me some bad moments. I desperately hoped her story would have a happy ending.

— "Ruby" exposes the complex and brutal relationship between mental illness, poverty and abuse … a page turner I had to finish

— “Ruby" really put me through the wringer and I actually had to put it down a few times because I needed to return to reality … There was no chance I was going to stop reading until I knew how the story ended! … I seriously can't wait for book two! 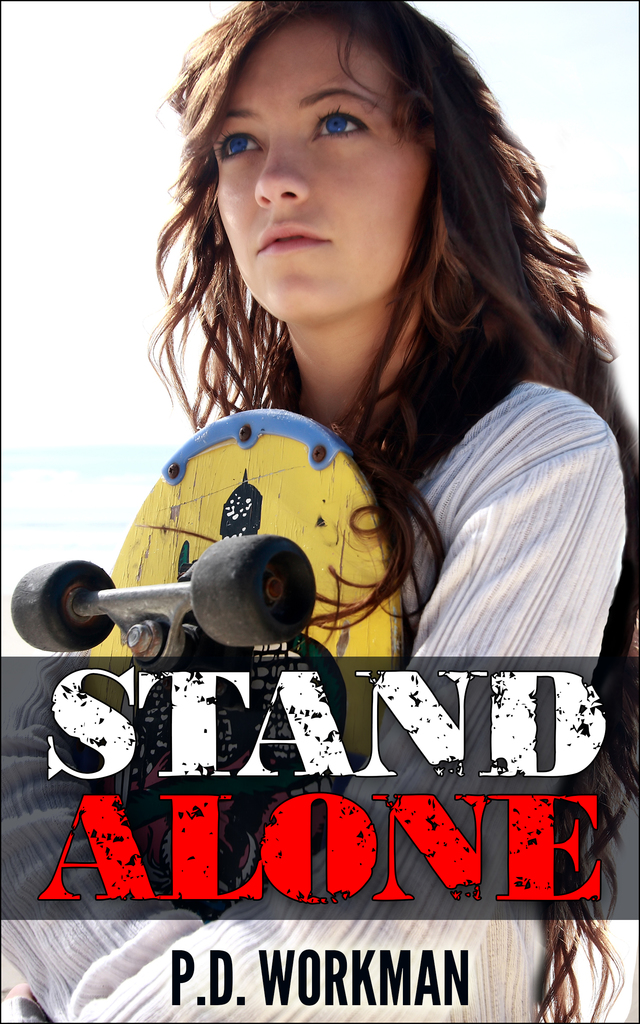 Her mother. The kids at school, and the teachers and administrators too. Even the police who pick her up from her night rambles. Maybe them most of all.

Justine’s therapist says she is ‘troubled’, but it means the same thing. He thinks that her vivid, reoccurring nightmares and atrocious behavior point to some trauma in her past; but Em, Justine’s mother, can’t explain it.

Justine used to have Christian, her best friend and skateboard partner. He was the only one who accepted her. Maybe because skating is the only time that Justine is really free to be herself. Now that Christian is gone… Justine keeps thinking things can’t get any worse.

Even as she sees her life spinning further and further out of control, Justine can’t give up her sense of who she is—someone far different than the loving daughter Em expects her to be—to just fit in and be happy. She is sure that Em secretly holds the key to who Justine really is. But if she does, Em isn’t talking.