Julian Scott was 15 years old when he enlisted as drummer and fifer with the 3rd Vermont Infantry.  He liked to sketch pictures and frequently sketched scenes and people in camp as well as scenes from the battlefield.  During the 7 Days Battle retreat from Richmond in the early summer of 1862, his unit was involved in combat with the Confederate Army which required crossing a creek.  As his regiment retreated across the creek, many wounded…

The Moral Line by Vanessa Bogenholm After being rejected and left alone, Alexandria, finds herself going down a moral line. Slightly desperate for money, she takes a one-time ‘job’ as a paid for companion by a…

What are Heavenly Signs

What are "Heavenly Signs"?

The Bible makes a number of surprising references to signs. The word “sign” occurs 855 times in 806 verses of the Bible from the book of Genesis to Revelation.

The Apostle John’s vision in Revelation has many signs that appear in the heavens. The prophetic…

Lots of good stories in the current issue, including one of mine: http://mystericale.com/current-issue/

Author Jay Dubya's 49th Book titled First Person Stories (552 pages) is now out in paperback.  FPS also currently exists in Kindle, in Nook and in Smashwords e-book formats, and the title will soon be available in hardcover in early January of 2016.

A review like this one from a complete stranger makes all the hard work worth it.

Poem: Happiness Will Be Realized

I want to journey to a place,
that’s unknown and unfamiliar;
He’ll stop the sense of déjà vu
and nothing can be familiar.

I’d love to get that sensation,
to live without pointing fingers;
when surrounded by holy peace,
I can know His Presence lingers.

Within this blessed serenity,
I’ll find His joy without worries;
Life slows to a Godly pace where
I’m being, not in a hurry…

to escape His magnificence!
Imagine…

Traditions of men get in the way,
while creating an unholy mix-
the Human Condition fails us now,
as our eyes on ourselves are transfixed,
blinded to The Father’s heavenly sway.

When relationships sadly break down,
we’re torn about whom we can still trust-
the Human Condition fails us now,
as we’re held back by our soulish lusts,
blinded to His mercies that abound.

Recurring loops of insanity,
ensure that we won’t find any…

Is tarot card reading real? Can someone who wears flowing robes foretell the future just by looking at the cards, or is tarot reading simply an elaborate scam to entice you to spend your money? Let’s try to look at things from a neutral point of view and learn more about both sides. http://bit.ly/1XptEcM

You, wonderful author, have officially written 50K of your novel during NaNoWriMo 2015 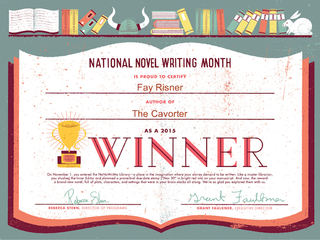 From the NaNoWriMo Site November 22, 2015 You, wonderful author, have officially written 50K of your novel during NaNoWriMo 2015. After all your hard work this month, you’ve finished a draft of your novel. We’re so incredibly proud to add your wondrous work to the shelves of “The NaNoWriMo Library”! My Lifetime Achievement Total NaNo Word Count up to 2015 is…

As Indie Authors, it's imperative that we present a professionally finished book to our readers, not only for their benefit but also for our reputation as an author. We all know it's difficult enough to create a bestselling novel, but if your cover is lacklustre and unappealing then you're sabotaging your hard work by not giving your book the opportunity to make the impact that it deserves.

Indie publishing professionals warn against authors designing their own…

MATH AND THE COMMON CORE

While similarities certainly exist between the Common Core and previous standards, there do exist some key differences. This week we will take a look at these three key shifts: No, it is not. Massachusetts has played a lead role in creating a Common Core. Apart from this, the core has outlined all the aspects that the students should cover…

ENRICHING LEARNING FOR ALL

It seems like such a simple word, but it can be one of the most important aspects of a child’s education. In so many schools, enrichment seems to be the tool of pushing forward learning for gifted and advanced students. Between programs, special classes, and extra time, these students reap great rewards with enrichment.

The reality is, though; they shouldn’t be the only ones.…

THREE WAYS PARENTS CAN USE PROGRESS REPORTS AND REPORT CARDS

It’s that time of year. Grading periods have closed, and students have come home with either Progress Reports or Report Cards, or possibly even both. As parents, we place the obligatory signature on the piece of paper and hand it back to our students to turn in the next day. We even review the scores and comments and might have a conversation with our child. But how to we actively engage in a conversation with them based on what the document says if we aren’t always certain ourselves? What…

IS THIS THE END OF STANDARDS BASED EDUCATION?

Recently, U.S. Secretary of Education Arne Duncan announced his resignation effective the end of the year. Immediately, President Obama named John King, Jr. as his replacement, leaving many to speculate on what his tenure could mean for education.

Many consider the end Secretary Duncan’s term to be more than a simple changing of the guard; they are speculating it may be the end of a standards-based education era. From 1993-2015, the tenures of
Secretaries Riley, Paige, Spellings,…

READING: THE MOST IMPORTANT ACTIVITY TO DO TOGETHER