Want some free reading thrills? For a limited time I'm offering a free copy of my thriller 'Sicilian Channel', which follows on from 'Gate of Tears'. Get a copy now on my website at www.jamesmarinero.com … The second in my 'Maghreb Triliogy', this is a bang up to date techno thriller. 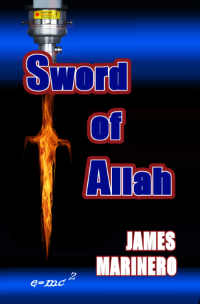 In February 2016 North Korea announced the successful testing of a fusion bomb. This sets the backdrop to frantic diplomatic activity and a multi-threaded tale of intrigue. Outrageous demands by a visionary terrorist group become public and throw the United Nations into…

Lymington, UK, 10th May 2016 - From milkman to author, Lymington to Moscow, James Marinero has great stories to tell. His latest thriller, ‘Sicilian Channel’ is published today.

This story reflects the upsurge of Islamist terrorism in North Africa - the Maghreb or Barbary Coast - attacking the ‘soft underbelly of Europe’ (Winston Churchill’s phrase).…

I've spent most of the past year working on a biography - a totally unexpected project for me. Now, Susan's Brother is published.

The intervening 28 years hold a remarkable story about a man who grew and prospered as a successful engineering professional, but started out as a dyslexic ‘slow…

Warning About Amazon - A Great Piece Of Marketing

A traditional bookstore owner has come up with a great idea for marketing his stores: An Amazon Warning Popup in the Google Chrome Browser! 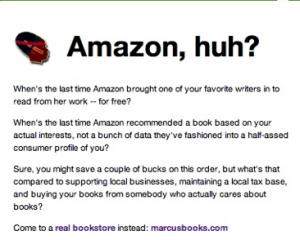 The full story is at…

At last I got round to revisiting my back-burner ePub project for Gate of Tears. Loading onto Amazon was easy - I did that months ago, but then gave up on the ePub version. Well, this week I cracked it. Then I found that choosing a distributor was a nightmare.

In the end I loaded it onto Lulu.com. It was quick, clean and easy as I'd got it through epubcheck1.2 at long last, before I attempted the Lulu load. It was up and available within 2 hours. Pretty good, given it's only 2 weeks…

Probably a bit off-blogtheme, but useful information nevertheless for authors about how the publishing world is changing.

My publisher sent me off this week, off with parcel of books. Copies of 'Gate of Tears' to deliver to my local county library.

In the UK, public libraries are under threat of execution. Many (some reports say 400) are seriously threatened because of cuts in public expenditure. Book acquisitions are being cut.

'You're a new product' my publisher says. You need to build a readership. Fair enough. Free…

Forgive me if this has been said somewhere else, but as I progress with my books, my approach to writing and marketing is changing. There's a tip here that some of you might find useful.

My work includes some scientific topics, politics, naval and aerial conflict, medical conditions and a host of other areas which require detailed research. When I do my research (and some of it is done during the writing of the book as a plot twists and turns), I organise my new knowledge…

Where did this guy come from? My publisher has been nagging me about press releases. So, we got creative.

Depending on genre, you can use snippets from your books to generate press releases. In my genre - techno-thrillers - it is perhaps easier than for say a genre such as literary fiction. We have a few press releases along the lines that follow:

Maybe A Useful Guide To An Author For Booksales, But Otherwise A C##p Video

Do you need a point of sale display? Well they are easy to make (< $2). Here's a cheap and cheerful video about how you can put together a low-cost counter-top bookstand. Why only put them in bookstores?

The Importance Of Book Cover Design - Setting Out Your Ideas

I worked with my publisher to produce a design brief, so we could get quotes for the cover design of 'Gate of Tears' - I hadn't realised that it was such a detailed job.

In the end we found a great designer, but even so, he didn't read or absorb the brief thoroughly and it seems there was a bit of to-ing and fro-ing. I ended up with something completely different to what I…

Gate of Tears is Here

I was finishing the last chapters of my thriller  'Gate of Tears' in March this year, in an apartment in Malta, overlooking the sea. British Tornadoes were flying on their way to and from bombing missions in LIbya, and I could see warships and ferries bringing refugees from Libya into Malta (just a couple of hundred miles away). The main political and superpower action in 'Gate of…