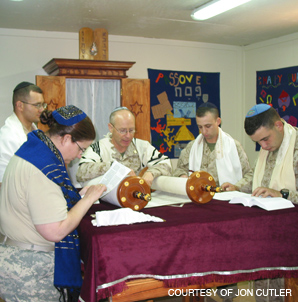 The article about Jewish military personnel in Iraq training as lay leaders caught my eye on www.jewsingreen.com – an online resource for Jews in the U.S. military.

I clicked on the link to the July 10th article in the Jewish Daily Forward by Richard Tenorio titled “American Soldiers in Iraq Enlist in a Different Kind of Service.”

Here’s the beginning of the article:

A Jewish chapel at the Al Asad airbase in western Iraq was the site of an unusual Jewish gathering that began on July 4.

Seven members of the American military had flown in from across Iraq for a precedent-setting training for Jewish leaders in that country. Iraq does not have much in the way of an indigenous Jewish population anymore, but the American military has brought scores of Jews to the region, most of them with little spiritual guidance.

To supplement the lack of rabbis in Iraq, one of the few Jewish chaplains in the country, Rabbi Jon Cutler, came up with the idea of training ordinary Jewish servicemen and -women to be lay leaders for other soldiers.

The complete article can be read at http://www.forward.com/articles/13753/

And what especially caught my eye was this comment on JewsinGreen.com in connection with this posted article:

So glad to see organized training like this. Maybe this can spread to other bases, not just in-theater spots.

Why was this article of so much interest to me? Because in May of 1971 my husband Mitch became the lay leader of the U.S. Army Jewish community in Munich, Germany, when the orthodox Jewish rabbi who served as the Jewish chaplain in Munich completed his three-year rotation.

Mitch had a Reform Judaism upbringing and didn’t, at that point, know very much. He was given no training. But he did have the support of a Department of the Army civilian lawyer, Philip Bernstein (z’l), who had retired in Munich and who was a very knowledgeable Jew with a beautiful singing voice. Many of my letters home to my family describe when either Mr. Bernstein or Mitch led Friday night services.

The idea of lay leaders actually being trained – Mitch just winged it – is a terrific one. And I hope that, indeed, Jewish lay leader training does “spread to other bases, not just in-theater spots.”