Recent Reviews for Where The Rain Is Made 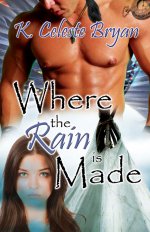 Hope you'll celebrate with me. The following reviews for Where The Rain Is Made just recently arrived.

First off let me start off my saying . . . I loved Where the Rain is Made! I predict this book to be a best seller. It is so good that words can’t describe it, but I will try. I enjoyed everyone from Cesca to Meko and everyone else in between. I read the electronic version and at three hundred plus pages, I sometimes have a hard time sitting for so long staring at a computer screen. I have to tell you that when I began reading this book I found myself glued to the seat. My husband ended up cooking dinner for me as I was engrossed in this book. Where the Rain is Made is a pleasure to read. There are not many books that come along like this one, but when they do, watch out. I am now on the hunt to read more books by K. Celeste Bryan.

I just have to say I would and have recommended this book to all fans of paranormal and historical romance. Bryan writes a great story! This is the story of Ethan Gray aka Meko, a time wanderer Cheyenne Dog warrior, and Fracesca Duvall, a white woman taken captive by him. The story starts off with Meko being sent back in time to try to save as many of the Cheyenne as possible but not interfere with the outcome of battles. Cesca and her father and brother live in Colorado looking for gold as so many settlers did at the time.

Where The Rain Is Made starts off with action and Im telling you it doesn't stop until the very last period. The Dog Soldiers attack the mining community and she is taken prisoner by Meko. Her brother is taken prisoner by a more ruthless soldier and the same one that killed their father. Cesca and her brother go through so much after they are captured but she remains a strong heroine, and that is what I really really like about this book. She does not cower, and only begs for her brother to be spared. I like the strength and that would be expected as she becomes the Dog Warriors wife.

Bryan had me go through a gamut of emotions with this book. I was laughing, fearing, crying, and there were so many moments of heart wrenching emotion with the hero and heroine. Bryan also introduced me to so many historical things I did not realize, ie: Dog Soldiers, had no idea they existed, she really did her homework on the back story here. There were many scenes with indian celebrations,and traditions. The story has a great twist at the end and I look forward to Bryan writing a story on Mountain Lion maybe?! I will be revisiting this book many many times.

“This is a great book! I highly recommend reading it! Plus the author is a wonderful person in general and responds graciously to all her emails!

Ethan Gray aka Meko, a time traveling Dog Soldier is called upon to go back in time from his modern day life to help his people, he meets his fate with Francesca (Cesca) the green eyed wildcat, when the Dog Soldiers are warring on the mine camp her father and brother are at. She is captured by Meko, and wow...does the story ever keep you glued to it. There was suspensful moment after suspensful moment. The conflicts and hurdles were just non stop but the love story was so touching.

Plus Bryan gives you so much great history about the Cheyenne in the book. I went through so many emotions with this book. I laughed, there were numerous times I felt my heart just clench in my chest for Cesca and Ethan. I havent read an Indian romance in a long, long while, but Im telling you WHERE THE RAIN IS MADE is a great book.

I will be revisiting it frequently to say the least.”