Here’s a question you may be asking yourself: Do I (Giovanni) really groove on this stuff? The answer is simply I enjoy good writing, plain and simple. And if that means that I follow that credo to read a work about the “Plain People”, my friends the Amish, then that is where I will go. I also knew going into this it didn’t include anything on Big Daddy Abel, EZ, Hez, Jake “The Plummer”, or any of the other “Amish Outlaws”. Be forewarned. But I digress yet again, sorry.

Melding two worlds, what is it like? Please when I get done my diatribe here, read the author’s bios; they will strike you as authentic, just as this work is, the real deal. “Amish Forever” is a very respectful look into the mindset of a very respectful and thoughtful group of people, the Amish. I personally love them, their ideals, and their outlook on life and family. Much can be learned from them and each time I get to read about them I learn a little something new to take with me. This work is no exception, and the best part is that there is more to come.

I am looking forward to taking the journey with this set of characters and find out where Roger and Crystal plan to take them. I will be interviewing Roger and Crystal today at 1pm EST on my blogtalk radio show The G-ZONE.

You can use this link to catch it live or in the archives: http://www.blogtalkradio.com/gelatisscoop/2011/11/05/roger-rheinhei... 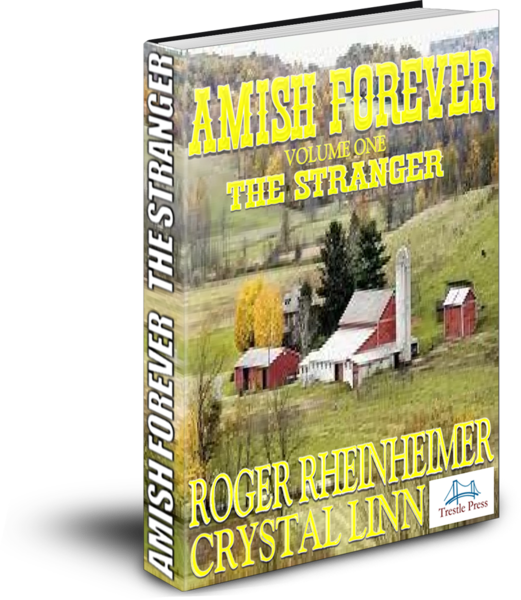 Here is more on what you can expect from this series:

“Ava Troyer never really considered the possibility of life outside of the warm, protective Amish community.  Even during her state-mandated schooling through the eighth grade, she would dreamily fantasize about whether any of the other Amish boys in the history class right after lunch was going to be the father of her children, or if she would meet the man of her dreams from another state, an exciting possibility.  But the wreck that killed her father and almost killed Ava, that early Sunday morning, at the hands of an all-night reveler, changed everything.  The young man in military fatigues that pulled her to safety spoke Pennsylvania Dutch to her, but he wasn’t Amish.  Or was he?  And how could she be so powerfully attracted to a young man about to go overseas to war, something she fiercely believed was wrong?

Roger Rheinheimer spent the first eighteen years of his life in northern Indiana. His father was the only doctor for a small town of 1200, and had a hitching rail on a side street by his office for the Amish patients. His father bought an eighty acre farm, and Roger and his older brother worked it, raising cattle and growing crops.

While he was still in high school, Roger learned woodworking skills from Elmer Schlabach, his Amish mentor. They built houses in the old-fashioned tradition, from hand-mixing the concrete for the foundations to hand-nailing the shingles. The only phase they did not do was the electrical. To this day, Roger enjoys using his wood crafting skills, making acoustic guitars and furniture.

Roger earned an undergraduate degree in Behavioral Psychology from a small private college in the Shenandoah Valley, took a Creative Writing class, loved it, and published a short story called My Brother.  He was a regular contributing writer to the college newspaper.

Roger has two novels in print and ebook, Amish Snow and Yield Spread: a novel.

Crystal Linn is a free-lance writer and award-winning poet who teaches a variety of creative writing classes. Her third book, Poetry for Friends, is scheduled to be released in the spring of 2012. She lives in the greater Seattle area where she enjoys reading mysteries, writing poetry and sailing with friends and family.”