|On Smashwords | On Lulu.com | On Amazon | Retailer Links| 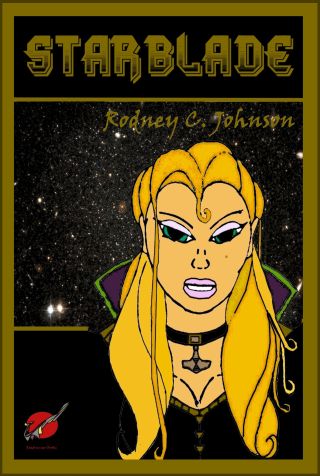 The year is 2030, and the planet rebuilds in the wake of World War III, the "War on Terror". Frederika von Gotha, Duchess of Saxe-Coburg, a synthetic person, called a Morningstar, serves as a spy for her tiny nation. Being the perfect honeypot helps! She is given a mission, learn about the mysterious Falcanians and the secrets they keep hidden away on their artificial island.

Chapter 1. Coming Of The Overman

Chapter 1. Coming Of The Overman

I give you power to create life out of lifelessness. From the Earth's clay, manufacture a woman, she who shall be Eve to a new humanity, and become mother of Stormangels!

A grand command chair rested on a central platform -- a throne! From the forward part of the circular operations deck, she shouted orders in a dialect she had never heard before, a language that hinted at being influenced by both German and Sanskrit, though it contained guttural “K's” and “T's”, sounds that were not heard in any known human language. Those in the work pit of the vessel who managed the helm and other systems of the monstrous predatory golden bird-serpent starship obeyed her and set a course toward her selected targets.

Over in a corkscrew rolled the large vessel, a smooth elegant rotation that swooped around in the vast dimensions of deep wide-open space, unencumbered by right, left or up and down to bring its weapons to bear upon its prey.

In golden armor she had been dressed, intricate links of ring-mail attached to plate-armor with angular upward swept shoulder plates. Draped over her shoulder hung a rich green cloak. On the bridge of her warship she stood, right hand on a sword hilt with an advanced gun strapped to her thigh. She was Doom incarnate, a War-Queen to be feared.

“Railkir!” She shouted to her gunner hidden in the darkness.

A shadowed red world came into view, covered with lighted cities that flickered and gray seas which crashed ashore. The bird-serpent let a ball of hot fire out from its belly to absolutely flatten a city below.

On a vast rusted desert, she discovered herself. She pushed her eyesight outward beyond the horizon where she witnessed a flash. An eerie green light burst out from the sand and coalesced into a column which became a winged armored figure. A deep cowl obscured the face. The figure stood with her on the rust strewn track. The warrior gripped a sword hilt in a gauntleted hand. It appeared to be a shattered blade for there was but a single spike left of the cutting edge. Three notches curved into the spine of the fractured weapon.

Blood rushed from cracks in the desert to form three rivers at the figure's claw boots which began to overtake the desert. In a deluge, a river of sanguine liquid ascended around her. Gauntleted hand raised the winged hooded one held out its bladeless hilt from which came a gleam of light...

Frederika Gisela von Gotha woke in a jolted cry. She gazed outside at her sprawling snow covered estate. Since her birth, the same dream had haunted Frederika, her eidetic memory never allowed her to forget the bird-reptile ship, or the winged hooded figure. Five-foot, eight-inches, statuesque, and honey-blonde Frederika got up, strode across her bedroom in a gracious stride for her balcony. She pushed aside a strand of hair, stared out toward the line of old dark forest, whitened by early morning frost. The synthetic girl rubbed the back of her neck, fingers grazed a tattoo: Two equilateral triangles' apex to apex, a stylized hourglass, or as some might observe, a double helix.

Dawn beckoned to her on the day of her twentieth birthday. Despite her illustrious surname, Frederika did not know her royal parents. If they could even really be deemed such, given her extraordinary origins. Though, in many ways she in fact resembled the haughty woman who once had been Duchess of Saxe-Coburg, and mistress of this estate, on who she also had been modeled, and whose 'daughter' she was been meant to be. Not at all surprising, given the precision which the engineer who designed Frederika's molecular construct had for his art in replication of the former Duchess. For that considerable effort the engineer charged a hefty sum to use his miraculous skills to create one of his unique lifeforms known as Morningstars. In any event, even the threadbare mimicry of a genetic connection permitted Frederika to be decreed Duke Magnus and Duchess Gisela von Gotha's heir. A reality that provided the synthetic girl this duchy, and along with it Grenadier Firearms, the weapons manufacturer which furnished Frederika a generous income.

Back into her room Frederika went, glanced for a heartbeat at her reflection in an etched silver vanity mirror: Contoured emerald 'panther eyes' peered back from a heart shaped face, slight Asian characteristics could be recognized among those of the Teutonic. A small button nose and a single freckle beneath her left eye, the solitary flaw on her otherwise perfectly symmetrical features. The blemish placed there due to some quirk of the engineer who designed her. Full and pink lush lips fashioned to make any male go weak in the knees were made to exude sexuality. Frederika knew she had been built to be exquisite, but her sexuality was also a weapon intended to be wielded for the seduction of those in power, a sexual aura enhanced by potent pheromones.

Frederika threw aside her slinky-silk mint green nightgown and headed for the shower. Her early morning workout would soon begin, and she wanted to watch the launch of the foldship, DSV Excalibur this afternoon. ...