Stars, Only Visible In Darkenss 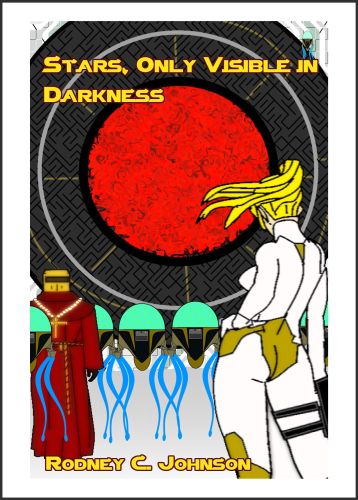 Frederika von Gotha, on a mission to the cult like, Techatron Union has an unusual encounter with a bucket headed, possibly mechanical bishop and finds herself entangled in long existing designs, which she knows nothing about. Frederika, is both a weapon and unwitting victim of the circumstances that resulted in her creation.

Though this is a direct prequel to Starblade, there exist many connections to both published Neo-human stories, and those yet to be released.

I see angels, angels in this very room. Now, I may be mad, but that doesn't mean that I'm not right. Because there's another force at work here. There always has been. It's undeniable. We've all experienced it. Everyone in this room has witnessed events that they can't fathom, let alone explain by rational means. Puzzles deciphered in prophecy. Dreams given to a chosen few. Our loved ones, dead, risen. Whether we want to call that "God" or "gods" or some sublime inspiration or a divine force we can't know or understand, it doesn't matter. It doesn't matter. It's here. It exists, and our two destinies are entwined in its force.

Eyesight, digitized. The world became an ugly lime green, pixelated fog, as her heads-up display tried to compensate for the recursive feedback, induced by the node jacked into her right temple. The node worked perfectly with most human interfaces. Yet, thanks to Frederika's 'enhanced' nature, it presented a conflict. Oberon Kreis, her guardian, assured Frederika, those very superhuman improvements however allowed her entree, and the skill to avoid Omicron.

She just wished that the shrill buzz would lay off inside her brain.

Omicron attempted to align Frederika to its overmind. Only passively aware of her, its next scan, Frederika could be sure, the great machine would accomplish its connection. Not a whole lot of time to pilfer those gel circuits.

Frederika harrumphed, ran her fingertips across the cool ceramic alloy wall. HUD restored on retinas, that belonged to big emerald cat-eyes. Thus far, she'd managed to avoid both humanoids, or Techla. Sooner or later, she'd encounter a member of the Techatron Union. That's why she wore the implanted node, so as to appear as if she were a novice cultist.

REST OF STORY AT LINK...