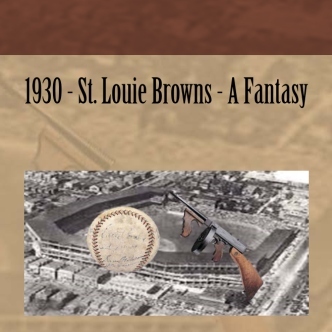 Something About Me and My Book:
My third book, 1930 - St. Louie Browns - A Fantasy, is available on Amazon. It's a fantasy about 1930 baseball, gangsters, prohibition, love, witchcraft, and the Nazi Party. Characters - Babe Ruth, Al Capone, Lucky Luciano, Isabol DeMolay (a witch, Adolf Hitler, Tommy Cahill

William Flynn (45) strolled into the office and walked over to the awards wall which contained oil paintings of George Sisler, Ken Williams, Jack Tobin, and Baby Doll Jacobson and a photograph of the 1922 St. Louie team.

Ball stood up and walked around his massive desk. He put his large hand out and shook Flynn’s hand. “How can I help you Mister Flynn.”

Flynn felt all his knuckles mashing into one.  Flynn smiled the smile of a man who never earned an honest dollar in all his life. “Mister Ball I represent an acquaintance of yours, Mister Edward Hogan.”

“Yes, I’m well acquainted with Jellyroll, what does he want?”

“His nephew, Tommy Cahill, would like to play third base for the Browns.”

“I don’t know, I told him he would be better off playing for the Cardinals. At least they have a chance of winning the pennant.”

“Not why he’d want to play for the Browns. Why would you think I would add an untested player to my professional baseball team?”

Flynn looked into Ball’s eyes, “I’ll give you two good reasons. One: the Browns are predicted to come in last place in the American League and last in attendance this year. So putting Tommy at third base for this team doesn’t make much difference. Second: Associates of Mister Hogan will make it very difficult for you and your family members to see the end of the season. Do I make myself clear?”

Ball wiped the sweat from his brow and smiled, “I guess we have a new third baseman.”

Flynn smiled, “You made a very smart decision Mister Ball. Tommy will be here Monday morning.” Flynn scanned the trophy wall as he walked out the door.

Ball kicked his garbage can across the office. He screamed into the intercom, “Jane, send Killefer and McEvoy up here now!”

“Thank you Jane, send them in.”

The new manager and the general manager of the Browns walked into the office. Ball pointed at the chairs in front of his desk. Ball took his time lighting a Cuban cigar. He looked at Killefer, “Who’s scheduled to play third this year?”

“We may have a problem with Mister O’Rourke playing third this year.”

“Have you ever heard of a player named Tommy Cahill?”

Bill Killefer (42) rubbed his unshaven chin, “I can’t recall a player with that moniker.”  He looked at LC, “You ever hear of him?”

“Well it doesn’t make any difference if you’ve heard of him or not. He’s your new third baseman.”

“Because Jellyroll Hogan sent his scum lawyer here and threatened my life and my family’s lives if this Tommy Cahill isn’t playing third on opening day.” Phil took a drag on his cigar and started choking. Killefer and LC started to get up but Ball raised his hand for them to sit back down. He put his cigar out in an ashtray.  “Doctor says these things will kill me.”

LC asked, “Can’t we report this to the law.”

Ball laughed, “Hogan owns the law in Saint Louie.” He asked Bill, “Bill, you managed the Chicago Cubs for a few years. Do you know anyone who can persuade Hogan that his nephew shouldn’t play for the Browns?”

“I stayed away from those people especially after the Black Sox scandal. I do know a lawyer who’s a big baseball fan and rumors are that he has some connections.”

Killefer pulled a small note pad out of his back pocket. “I think I have his number in here.” He flipped through a couple of pages, “Yeah, here it is.”

Ball handed Killefer the handset of his Model 102 telephone.

A female voice answered, “Law office of Louis Piquet.  How may I help you?”

“Hello, this is Bill Killefer ex-manager of the Chicago Cubs. I would like to talk to Mister Piquet for a few minutes.”

The phone went dead for about thirty seconds. “Bill, how can I help my favorite Cubs manager?”

“Louie, I’m managing the Browns this year and some local hood by the name of Jellyroll Hogan is strong arming my boss to put his nephew on our team as the regular third baseman. I was hoping you knew someone who could talk Hogan out of it.”

“Let me give you some friendly advice. If you like your kneecaps the way they are you have a new third baseman. The kids protected.”

Killefer turned his crimson face towards Ball, “We have a new third baseman.”