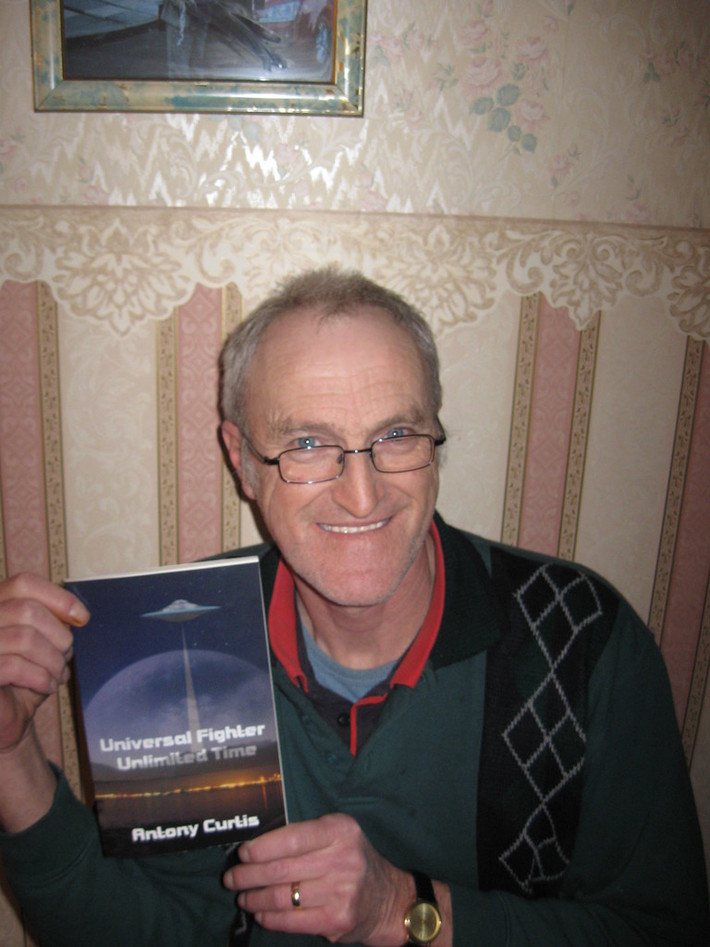 tony curtis has not received any gifts yet

Something About Me and My Book:
I am 56 and fighting fit, (yeah right) been into sci-fi and all things space all my life, remember fireball XL5?, well i do, and that was the beginning of my love for all of it. In 1975 I joind the army and took up Karate, I achieved black belt in a couple of styles and 4th dan in another. I then opened my own karate school. When I finished the first book, I then started looking for an agent and publisher. 15 years later I found one, with Blackleaf publishers. Action adventure sci-fi was great fun to write and I did not know how easy the thoughts for what was to come next flooded my mind.

When she was able to move her self, she wandered around the head stone and around Michael. Michael stood still but followed her with his head only till he had to turn it the other way. She smiled at him then started to speak.
“There are a lot of questions to answer, but the one that will put your mind at rest is the one about the suit, I got given the suit at the tournament, by a man who asked me to look after it. It is a special suit; it gives off great powers to the person who wears it. I do not know who he was but he said that it must not fall into the wrong hands, I did not know what that meant, but I, like he did in me, trusted him. So the only way to keep it safe was to wear it. Michael it does have great power, and now that I am gone from this earth, I will let you have it when the time comes”. With all that, the mist dissipated, and was gone. Michael called to her time and time again, till she spoke again, but this time, it was only in his head again.
“I will always be with you.”
Michael walked the lonely road home. When he got there, Michael was alone, his dad had gone out himself, but Michael did not know where, it never bothered him as he did this sort of thing all the time. But as Michael was in full swing with training, the front door opened and Michael never looked, as he thought it was his dad came back from where ever he went, but it was when the person spoke that stopped Michael dead in his tracks.
“I want a word or two with you boy. So sit down, and sit on your hands and listen.” Michael did so with a touch of fear in him, as this man, the pilot had a gun in his hands.
“I want the suit that your mother had, or if the truth was known, stolen from me, and I want it now, you have two minuets to tell me where, and the clocks ticking”
“OK, I'll tell you but first tell me this, was it you that started the war?”
There was a silence for about ten seconds, till the pilot spoke again.
"Yes I did, it seemed the only way to rid the earth of all of you fighters, but I never thought that the top brass would chicken out half way through it. Now where is the damned suit?”
Without warning the door burst open and a loud shot rang out, and soon after the front door shut, all was still and quiet. But there was a body left on the floor

what i cant understand is, when all your freinds and family think your book is great and cant put it down to go to bed, and alot of people want to know where to get a copy from, why dont agents have the same interests as every one else, and and really look at your work and take you on?

just becouse "They" dont like it, dont mean to say 1 million other people wont.

Complete beginner in need of help

Having finished my sci-fi action adventure novel, and found a publisher to print it. I now feel all the easy work has been done. It seems that now I need to market this book myself and I have bought marketing equipment and book signing materials at a cost that was higher than expected. Now I have all the equipment and the book, all I need now is to get it out there, so to speak. any ideas that you might think of or used to help would be so greatfully received.