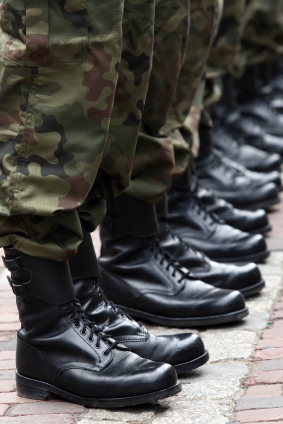 I have mixed feeling about the accuracy of PTSD. First off, I think it is way over-diagnosed. Some people get it worse than others.

I used to scan the sides of the roads when I came back the first time, but I stopped doing that after a week or so.

By "over-diagnosed" I kind of mean that there really aren't levels of PTSD. Someone can claim PTSD even if it is mild nightmares. My fear, and one of the reasons that I would be reluctant to go to anyone if I thought I had it, is that I would be marked for life. I might not be able to own a gun or hold a certain kind of job.

I also think that medical units hand out PTSD diagnoses like candy, because it’s easier than treating the problem. So they give them the diagnosis, take two Motrin, wash your hands and move out. When really that soldier just needs three days off, a hot meal and a chance to call his wife.

This topic of PTSD brought forth an interesting idea on the part of my husband Mitch in connection with the Torah portion read at Shabbat morning services yesterday. (Each week Jews read a portion from the Torah – the Five Books of Moses, completing the entire Torah in a year.)

Yesterday the portion was Mattot (Numbers 30: 2 to 32: 42), which talks in part about the offerings made by the warriors of Israel who have returned from fighting and killing the Midianites. The officers make a special additional offering.

Mitch put forth the idea that this offering by the fighting men was a ritual that helped to prevent PTSD. By making a public offering of forgiveness for having killed in battle, these warriors could hope to banish some of the mental demons that resulted from their acts of war.

And – as my husband, a former officer in the U.S. Army, said – of course the officers had to make additional offerings because they would have felt more guilt. They are the ones, my husband pointed out, who ordered their men into battle, saying “Take that hill” and knowing some will die doing so.

Perhaps instead of being treated with psychoanalysis and drugs, combat veterans of all wars would be better off if they could participate in a community-wide expiation ritual, admitting their acts of war and being publicly forgiven for those same acts of war.

I’ll ask BT what he thinks of this idea.