PS: I Love You - Maggie Tideswell 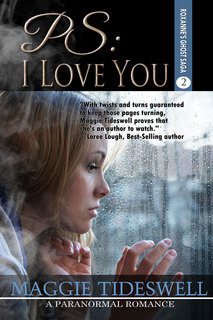 PS:  I Love You: A Paranormal Romance (Roxanne's Ghost Saga Book 2) - Review by Martha A Cheves

He should have brought his tools with him.  Without their aid, he couldn't hear the whispers clearly enough.  Turning, he looked back at Ben's house on the hill, debating whether he should go back to fetch them or not. The portal might shift in the time it took him - they were not absolutes carved in stone - and he'd miss the opportunity.  He'd have to make do without the tools and channel his powers of concentration that much harder.

Slowly walking toward the headstone because it seemed the logical place for the portal to be, he kept his mind open and blank, receptive to any words that might fall into it like seeds into fertile ground.  He sensed someone talking.  Choosing a spot roughly equidistant between the three headstones, he sat down and crossed his denim-clad legs, his hands open-palmed on his knees.

As in book one of this series, Jessica is still at the home that had belonged to Ben and Roxanne where she had gone to take up the position of the Nanny to their daughter.  In this second book Jessica is tortured by the missing Roxanne's sisters, especially the twin who has her sight set on taking Roxanne's place in her marriage to Ben and becoming the mother of their child.  And the tale continues from there.