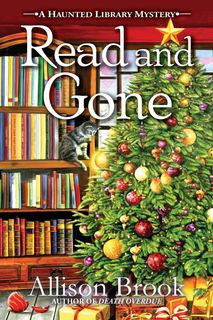 Read and Gone - Review by Martha A. Cheves

Jim sat down at the kitchen table while I made up a plate with slices of turkey and ham.  I also warmed up a huge piece of lasagna in the microwave.  He ate quickly and neatly as usual.  My father was a thief, but he believed in good clothes and good manners.  When he asked me to serve him more, I knew he probably hadn't eaten since yesterday.  "Coffee?" I asked.  "Please, Black, two sugars."  "As always," I murmured before I could stop myself.  I was annoyed that I'd kept his habits close to my heart.  He shot me a grin.  "You remembered."  "Why are you here? I asked as I slipped a French roast pod into the Keurig.  "I need your help, Caro."  "Do you know Benton Parr, the jewelry?"  "I've met him since he's on the Library Board with Uncle Bosco.  And I've spoken to him a few times on the phone.  He's giving a talk Tuesday evening on 'Gems: How to Tell the Real from the Fake."  "Benton Parr's a thief!"  I started to laugh but immediately froze when I caught his furious expression.  "We nabbed seven million dollars worth of perfect loose stones.  My retirement fund.  Parr took the lot for safekeeping.  I've tried contacting him several times this past month, but he refuses to answer my emails and calls.  I'm afraid I need to ask you to act as a go-between and retrieve my share of the stones."

Carrie Singleton has had her father come in and out of her life for as long as she can remember.  She spent her childhood being ashamed of him while he served time in and out of jail.  Now, just a few days before Christmas, he has shown up at her home wanting her help to recover jewels that he and another man have stolen.  Who does he think he is?  She should just tell him to get lost, which she hopes he will do soon but not before he is attacked and hospitalized, leaving her to take care of him while he's in town.

The first book in this series, Death Overdue, was a very enjoyable read.  Carrie moved to her father's hometown and found herself a job working as the Program and Entertainment Director for the local library.  She also found herself becoming the major factor in solving a murder.  In Read and Gone, Carrie is again involved in several murders as well as the search for the jewels her own father helped steal.  The question is, was he involved in the murders too?

This book takes you around many curves.  There are many suspects to choose from, keeping the reader running from one to the other until the end.  I must say I was surprised.