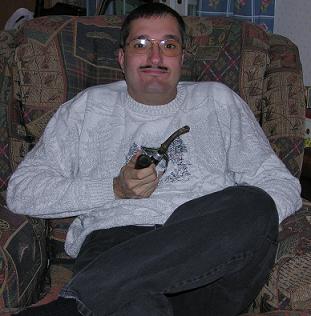 Edward T. Cook has not received any gifts yet

Something About Me and My Book:
Edit
Personal
About Me:
Edward T. Cook graduated from Northern Michigan University in 1980 and is a police lieutenant and firearms instructor with a private university in the Midwest. He has served with the law enforcement community for more than 30 years, both in Illinois and Michigan. Author Edward T. Cook is also a member of the following writer’s organizations:
Military Writers Society of America
American Authors Association
Upper Peninsula Publishers & Authors Association
Police Writers.com
Between spending time with his wife, son, parrot, and cat, and taking the family to see America, he finds time to write, and is currently working on other historical books and mysteries.

*New Book - "Letters From Heroes" WWI & WW11 To be released in December!

The author can be contacted at the following e-mail address: edward.cook3250@sbcglobal.net or web site http://e.t.cook.home.att.net

Favorite Movies:
Star Wars - All of them! The Godfather

The hardships , struggles, hopes and triumphs of the men and women who served in World War
I and World War II is wonderfully captured in Letters From Heroes (ISBN 978-1-58909-570-0),
by Edward T. Cook, a new book just published by Bookstand Publishing. This poignant
collection of real letters from real servicemen allow the reader to see things through the eyes of
these soldiers and understand their thoughts about war, training, sickness, the enemy and even
their food.

“The great wars are part of our history,” says author Edward Cook.
“The men and women who served in our armed forces during them
should never be forgotten for the sacrifices they made. For, after
all, they are all heroes.”

This collection of letters is divided into four chapters: World War 1
letters; letters from soldiers preparing for World War II; letters
from soldiers fighting against Germany in World War II; and,
letters from soldiers fighting against Japan in World War II. For
the most part the letters are from common soldiers writing their
family and friends back home and they reflect everything from
complaints about the food, anticipation of coming home,
digressions on the destruction of war and the excitement of
liberating POWs. There are over 50 photographs from the World
War eras, many of them never before published. Many are of 104th

“I would like to think that every soldier is a hero,” says Cook. “A hero to his nation, a hero to
his family, and a hero to himself. That person could be a barber, electrician, cook, clerk, or
doctor. That person could be a private or a general. They are all heroes in somebody’s eyes.
Many were drafted, others volunteered, and some wanted to make the armed forces their career.
It takes a combination of men and women to make up our armed forces. They all have a job to
do, and they do it well. They give their time, their sweat, and even their blood for our great
nation. They are away from their families for months or years. They see death, they see
happiness, and they see themselves as doing a job: To protect our freedom and freedom for
others. They willingly make that sacrifice for their country.”

“I published this book,” says Cook, “because I wanted to document these letters and get it out to
the public. I didn’t want these memories to be lost forever.”

Edward T. Cook is the author of four other books, including The History of the 104th Combat
Engineers, Guiding The Way From Middle Neebish, Stars & Shields: Cop Stories, and Murders


Do Not Come by Accident. He is a member of the Military Writers Society of America. His
website is: http://home.att.net/~e.t.cook/wsb/html/view.cgi-home.html-.html

Letters From Heroes is available from:

Ed Cook's passion for history as a "You-are-there" proposition has resulted in a tremendously moving tribute to our men in arms. The soldiers of these various conflicts came alive for me. It is one thing to read dry accounts of battles and troop movements--how much more moving to read the actual words and thoughts of the soldiers who were there. Be sure to read this book.
Tom Adolphson
MA, History, University of Minnesota

Linda Cook said…
Hi, I really don't know what i'm doing. Please give me some tips on an easy way to get around the web. I think I might be getting mixed up with some people I shouldn't. What exact areas is best to go too? Hope your feeling better. My sister inlaw had that surgery and she said it was very painful. Say hi to Colleen for me.
It sounds like your books are doing very well. GREAT Love Linda

Brian L Porter said…
Thanks for your congrats on the movie deal Ed.

Not sure about the knioghthood but a successful movie would be great, and I'd love for A Study in Red to pick up a few more trophies along the way. I must admit I'm very proud of my 'baby'.

Brian L Porter said…
Thanks for your vote and your support Ed. You may be right about hte Trojan Horse. At least you got there in the end and I appreciate it. Has your book arrived yet?

From 1st January 'A Study in Red' will be in the poll for Preditors & Editors Thriller of the Year. Hope I can scrounge another vote from you for that one?

Hi Ed,
Welcome to BMN. I hope you find this a useful and helpful and also a pleasurable way of getting the message of your books across.