A fairytale from the golden age of Hollywood: 'Princess April Morning-Glory" on virtual book tour

What kind of a world would you create, if you had to do three good deeds to make it home again? The answer to that crucial question, as given by the title character in Letitia Fairbanks’s charming fairy tale, PRINCESS APRIL MORNING-GLORY, tells a unique and captivating story. Although she lives a fabled life in a 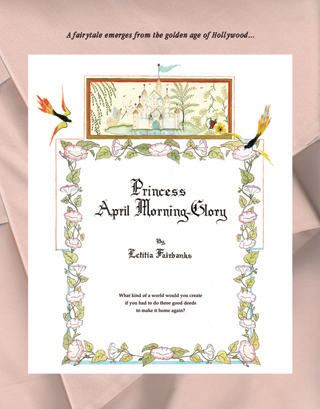 Poem: Not Against Flesh and Blood

Must we compete in spiritual matches,
against unseen, devilish competitors?
Must we needlessly suffer and find…
our souls ending up both worn and sore?

Within this fallen, earthly world,
the rulers of darkness don’t worry me;
for I know that their authority
is incapable of imprisoning completely.

Their ongoing tactics of fear,
is something that I’ve already seen.
So I’m not concerned, knowing…
that I’m a member…
Continue

Living within the house of idol makers,
the depth of my soul was perturbed.
How could one justify the worship of art?
To me, such comprehension was absurd.

And yet, it was still clear to me,
that worship was a necessary component;
so I craved a logical and moral way
to circumvent my spiritual descent.

Knocking over these impractical statues,
made from gold and various materials,
demonstrated glorification of dead…
Continue

The William S Club - Review by Martha A Cheves, Author of Stir, Laugh, Repeat; Think With Your Taste Buds; A Book and A Dish
Damon’s grandfather pulled a heavy brass key from around his neck. For as long as he could remember that key had hung there, a visual reminder of a lifetime of secrets. ‘I want to know the moment she boards the…
Continue

Check out my interview with Teresa Ashby on her blog.
http://teresaashby.blogspot.co.uk/2013/01/divorceesbiz-eileen-thornton.html#comment-form

Your Software is Your Path to New Communications

I’ve spent the last few weeks doing a lot of marketing and promotion for my nine novels and it has paid off. My main blog, ALWAYS WRITING has reached a milestone 250,000 + page views, and the other sites that I post blog articles have reached a combined 150,000 + page views. Not bad for the twenty months they have been in existence.

Now that I’ve reached a comfortable level of exposure it’s time to get back to the business of writing books. I did manage a 20,000 word outline…

British Author, Geoff Nelder, won an American award in the world of science fiction this January. His book, ARIA, has won the coveted Readers’ Poll run annually by the Preditors & Editors organisation in the US. The first volume of the trilogy, ARIA: Left Luggage, published by LL-Publications, came first out of 85 novels in the category of science fiction and fantasy. ARIA has caught the imagination of readers worldwide as it is the only book to have used the idea of amnesia being…

WOW!! Divorcees.Biz is now available in paperback from Amazon!!

Divorcees.Biz is a fun romance set in London. It tells of four thirty-something, divorced women who decide to set up an online dating agency for divorcees.

The story is lighthearted and frothy.

Check it out for yourself!!…

My next book is published

My book, "Android Programming Unleashed" is published this month by Sams Publishing.

Here is the link:

I am sure, you are going…

There was a link on Facebook yesterday to an article written by the best-selling, crime writer, Sue Grafton. She had caused a stir by accusing indie writers of being lazy. It seems she had to withdraw the accusation because of the reaction from the public. It made me wonder what must have been going through her mind when she said that, and would she have said that before she became a published writer. The old saying “struggling in a garret” comes to mind when I think of people like myself…

Become an author - come to Author101University in LA Mar 7-10

Meet agents and publishers looking for your book

Everyone who leaves a comment will receive a free e-copy of Kicking Eternity, also, from the New Smyrna Beach series.

In the tradition of The Sisterhood of the Traveling Pants, four friends navigate college and the drama churned up by their Florida beach band to…

...I AM OFFERING MY TWO BOOKS FOR FREE ON FEBRUARY 2 AND FEBRUARY 3, 2013 THROUGH "AMAZON" PROMOTION PROGRAM.

I AM APPRECIATING YOUR REVIEWS AND COMMENTS.

...EXPERIENCE THE ULTIMATE SIMPLICITY THAT KNOCKS ALL OUTFIT OFF...

...WITH THESE ULTRA-SIMPLE TOOLS NOW YOU…

Our Life Leaves Clues That Lead To Our Life Purpose

Excerpt from Discover What You Are Here To Do: Find The Clues, Follow Your Path by best selling author Nicola Grace.

"When I’m on the road speaking, I often joke about the story of my life as if I’ve stuffed up, done everything wrong and made wrong decisions that lead me up the garden path of nowhere. Part of my introductory speech often goes something like this – “I wanted to be a dancer so I studied history. I wanted to live in a tropical country so I moved to Wisconsin. I wanted to…

Charles Dodgeson was an ordinary Englishman until he was visited by the literary god Liddellicus, when he was gifted with the magical power of storytelling and writing, and his superhero name.... Lewis Carroll.

Join Jenn as she drags Brent along on a joyful examination of Lewis Carroll's life and influence in the literary world and beyond.

Additionally, we share the latest publishing news. calendar events and reviews for you to enjoy as the Brick…

Eternity Is Only A Breath Away

Eternity is only a breath away, but we must choose it first.  Poignant, heart-warming and fascinating, this true account of one woman's journey through life, then to Heaven and back, is quite unforgettable.
My Journey To Heaven and Back written by Rebecca Myers is a remarkable true story of her amazing near death experience.  Rebecca's story is one that will forever leave an indelible imprint on one's soul.  Experiencing near death while undergoing surgery, she…
Continue

Keeping up with the world

Two years ago, after amicably parting ways with my literary agent of four years, I decide to take destiny into my own hands and publish my books in eformat. I had a huge collection of completed and professionally edited novels and decided that publishing one every three months seemed feasible. So, that’s what I did.

Little did I know I was on the cusp of an indie publishing revolution. My books were available at the right time, for the right audience, and at the right price. Kindles…

No Chocolate on Valentine's Day for me.  Chocolate is too ordinary.  In fact, it has little to do with the beginning of the myths around St. Valentine and the day of love we celebrate.

Valentine's Day is a day that represents the unique emotions and experiences that love engenders. What is your unique way to express love?

For me, orchids are the most exquisitely beautiful flowers in all…