This is fun for me. At about the same time I finish the last part of "An Amish Home", I get to re-visit the first chapter of my first story, "An Amish Journey". 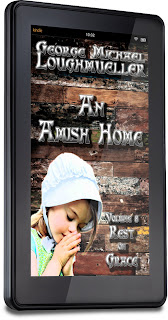 "Rest on Grace" is the conclusion of "An Amish Home". Over…

The Fall, but it's not Spring yet

Sometimes, we are faced with the inexplicable. Sometimes, things do not go as we planned.

That does not mean that there is not something better waiting on the other side.

In "An Amish Home Volume 7 – The Fall", one of those things happens.

Young Ruth and her brother venture off into the woods for some innocent and much needed play time. What happens next is almost a tragedy and Ruth receives an ominous message from the mysterious figure that some have called her…

Are you ready for a contest?

We hope that you are ready for a contest; we would like you to have fun with it.
How do you participate and what are the prizes?
Here are a few things you can do:
-Go to the Helping Hands Press website and sign up for our mailing list. We will start using the mailing list March 1st, and send out the newsletters each month on the 1st and 15th.Each newsletter…
Continue

Added by George Michael Loughmueller on February 2, 2013 at 9:30am — No Comments

Moreover, brethren, I would not that ye should be ignorant, how that all our fathers were under the cloud, and all passed through the sea;

And were all baptized unto Moses in the cloud and in the sea; And did all eat the same spiritual meat;

And did all drink the same spiritual drink: for they drank of that spiritual Rock that followed them: and that Rock was Christ.

But with many of them God was not well pleased: for they…

The same, but different

"An Amish Home - Volume Four - Life on Canvas"
is available today and I wanted you to know I did something a little different.…
Continue

Added by George Michael Loughmueller on November 5, 2012 at 8:31am — No Comments

"What man of you, having an hundred sheep, if he lose one of them, doth not leave the ninety and nine in the wilderness, and go after that which is lost, until he find it?

And when he hath found it, he layeth it on his shoulders, rejoicing.

And when he cometh home, he calleth together his friends and neighbours, saying unto them, Rejoice with me; for I have found my sheep which was lost."  - Luke 15:4-6…

That is important to me. It really is.
When you have a child, that is something you think about a lot. As a parent, we have to plan, prepare and teach our children everything we can to protect them. Sometimes, that is all we can do and sometimes that is not enough.
I have probably always known this, but becoming a father has reinforced it. There is one thing more, and it should be the first thing. Trust God.
I could put bars on the windows and my daughter…
Continue

My publisher told me I was on Kobo now. I think one of my friends in high school played the "kobo" in marching band.

When I found out it was not a musical instrument, I discovered it was a Japanese eReader which is huge in Canada and 170 countries around the world.…

Recently, I received an email asking me what I read and what influences me?
With a full time job in the wonderful world of retail sales and a beautiful daughter growing faster than a weed in the spring, I feel like I barely have time for anything else.
These days, I try to squeeze in a story from some of the very talented authors here at Trestle Press: Karen Vogel, Sarah Price, Crystal Linn & Roger Rheinheimer (sorry for not listing them all – there’s too many).…
Continue

Gothic Cathedrals and the Art of Melodrama by Mark Carver

As the seeds for The Age of Apollyon were taking root in my imagination, I read Victor Hugo’s The Hunchback of Notre Dame. In addition to being a fantastic story, that book opened my eyes to the breathtaking marvels of Gothic architecture. I’d always been a casual fan of cathedrals (who isn’t?) but after finishing Hugo’s masterpiece, I was determined to incorporate the Gothic church and all of its accompanying melodramatics into my own writing.…
Continue

A Triangle of Blessings: Amish, Writing, and Readers

I was first introduced to the Amish when I was only eight years old. It was my grandparents who took me to Lancaster County, PA. I sat between them on the front seat of their Cadillac, bouncing up and down with excitement as we passed each horse and buggy.
My grandparents came from a long line of strict Old…
Continue

Added by George Michael Loughmueller on September 7, 2012 at 6:32am — No Comments

Meet Best-Selling Author Marsha Hubler and
THE LOVES OF SNYDER COUNTY SERIES published by Trestle Press
With “horse blood in her veins,” what else could Marsha Hubler write about but stories with horses?
“From the time I knew what horses were, I loved them,” Marsha says. “Although I collected horse models, wrote stories about horses, colored horse pictures,…
Continue

An Amish Home. That’s what Allan has now. He found his path and so much goodness came into his life. My new stories are set in Karsten Field about eight to ten years after An Amish Journey. Allan is happily married with two young children. His oldest daughter, Alice, even has a family of her own. Life is good.
That doesn’t mean they don’t face any challenges. Sometimes, when life is that good, we need reminders. An…
Continue

Today I have here with me two very special people; Roger Rheinheimer and Crystal Linn who are Amazon top-ten selling Kindle authors, including their joint Amish romance series, Amish Forever.
Welcome Roger and Crystal and thank you for joining us today. Tell me, how does it feel to be a successful author?
Roger: I’m still blinking! All I can say is thank you to…
Continue

What is your connection to the Amish?
I live ½ hour away from Smicksburg, PA, a large Old Order Amish settlement. I shop at their stores and we hired Amish men to help remodel our century old farmhouse. It’s been fifteen years of remodeling, (still not done…) so we got to know many men and their families. On their breaks, they love to talk and swap stories, and I always have 1001 questions, ranging from “Do you grow celery for weddings?”(They had no idea what I was talking…
Continue

I'm working on it

I thought once I completed the story of Set Free that I would move on to something else. I discovered I was wrong. With An Amish Home, I really enjoy going back to Karsten Field. The first story is available for $0.99 at this link - http://goo.gl/oc82v…