New newsletter that will feature authors and reviews

Hi everyone!!! I wanted to let everyone know that I am starting a monthly newsletter. I want to feature one author per month with an interview and list recent reviews from several authors that I have wrote. I will also be selecting books to list on my Amazon bookstore site. NOT EVERY BOOK WILL BE PLACED IN THE BOOKSTORE. I also will have a place for readers to read about special needs current events, since my book is about autism and cerebral palsy. By listing articles about current events I… Continue

Check Out My Blog About Leap Year and Leave a Comment

Be prepared to take a journey into Pamela K. Kinney's imagination of fantastic dreams of horror, science fiction and fantasy, plus true ghost stories in… Continue

It’s hard to believe that February is almost gone. I would like to extend a big thank you to our clients, our blog hosts, and all the readers who have made this such an enjoyable month of virtual book tours. Here’s what we have for you on the final day of February Authors on Tour:

LaConnie Taylor-Jones drops in at Inspired Author to talk about her inspiration, how the romance genre chose her, and… Continue

A Book Trailer I created: Islands of Mak-Naw

Can I tell you mine? Actually I have two. The first one creeps up in church, of all places, right in my pew. The worship leader announces the hymn number and the person beside me makes no attempt to open the book. Instead, stands silent.

I know, I know, you’re probably thinking how do I know that since I’m blind?

I can hear real well. In fact, my ears are tuned to all voices not only from the choir, but also to those seated around me. So why does that bug me? Because… Continue

Pump Up Your Book Promotion's February Authors on Tour - Day 19!

A review of LaConnie Taylor-Jones’ When I’m with You appears at J. Kaye’s Book Blog

The most important review is . . .


Today is the official launch day for DISTRACTING THE DUCHESS by Emily Bryan! (Though if you're an Amazon customer, you know it's been available there a couple days early!) I love these characters and I'm so excited to be able to offer Artemisia and Trev's love story to the world.


When I decided to write a Victorian set tale, I wanted to make sure my characters weren't the usual suspects--you know, the ingenue and the rake.… Continue

The "Laura and the Leprechauns" book trailer has officially been released!

The day has finally arrived—my book trailer is finished and ready to be viewed! I have posted it on my website at www.chrysalispress.com in the Media Room under “Book Trailer.” It is also posted on Reader Views Kids website at http://readerviewskids.com/reviews_previews.html. I will also post it on youtube.com (you will have to search for it under “Laura and the Leprechauns”) and on my… Continue

Letter From a Happy Reader

I stumbled on to your website after running a Google search for writing. I wasn't entirely sure what regarding "writing" I wanted, besides some HELP. What I found on your site was just—WOW. I had asked for a drink of water and I got a flood!

I read EVERYTHING. Then, I jumped on to Amazon.com to buy your book. I've read other books on writing, and they all have their good qualities. One mantra that was consistent across texts was "just keep writing, keep at… Continue 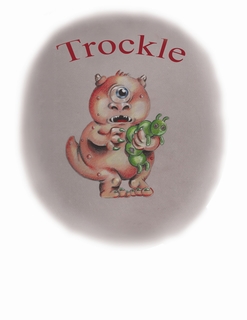 Trockle, the little monster in the children's book by Holly Jahangiri and illustrated by Jordan M. Vinyard, now has his own blog. Please visit for his comments and information he may want to share.

I Don't Understand my Husband

I Don’t Understand My Husband
The lyrics to the old Village People song, "Macho Man" echo in my head. But that’s not my husband. He’s not a macho man; nor did he fulfill my dreams of me marrying a muscular-bound hunk who, with one wink would melt me to nothing.

Instead, I married a man I cannot understand. If you were to peek into our family room, you’d find my husband, Gene, on the recliner with a bowl of chocolate ice cream balancing on his slightly protruding belly, pausing… Continue

Today on "Talk To Me...Conversations With Creative, Unconventional People"

My guests will be the dynamic musical duo Fiske and Herrera. Fiske amd Herrera are creating quite a stir in the online music world. Known for their tight harmony and ambitious arrangements, the singer-songwriters recently won first and third place in the OurStage.com Acoustic Music Channel competition. Their song… Continue

Your Book Covers on Posters and Canvas!

For those of you who didn't know, I own and operate the business, BiggyPix.com. BiggyPix turns your favorite digital, traditional, 35mm slides and negatives, and art files into large Poster and Art Canvas Prints.

These prints are archival quality and are fantastic for your home, office and events. In fact, every single person who has ever ordered our products, loves… Continue

Book festivals are fun - you get to meet new authors and some more familiar ones alike. You get to renew friendships and acquaintances from other areas of the writing life. I was a volunteer at the SC Book Festival for the fourth year in a row. I had a blast, save my horror story. So long story but overall, the book festival was another success.

(This is posted in two parts on my regular blog - http://elysabethsstories.blogspot.com)

The SC Book Festival was this past… Continue

Author Kim Smith recently interviewed me about my writing career and the interview is available to view on Kim's website at http://www.mkimsmith.com/interviews/brianp.html

February is almost over and with it my book tour. I can hardly believe it. It's all gone by so fast. Todays stop is:

It's an interview about how I write, how I create story, characters, and my experiences with agents and publishers.

It has been many months since I've had the time to visit Book Marketing Network, and in that time much has happened. Last December, after much consideration, I decided it was time that I took my common sense ideas to the arena of public ideas. I decided to run for Represenative to the Maine Legislature, and thus far it has been a mixed experience.

When I first announced, people were very excited to hear than a normal guy was finally going to run for an elected office, someone who… Continue